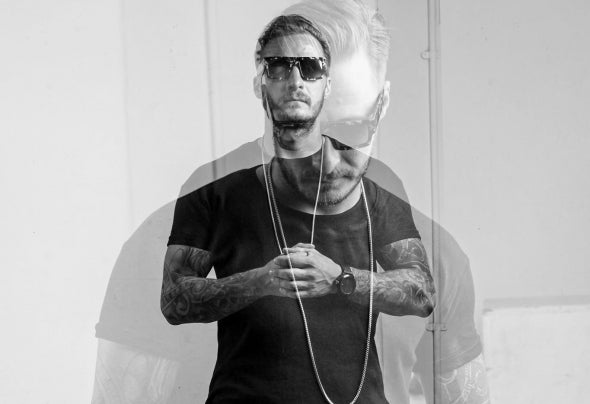 As a DJ he is as comfortable playing festivals in Japan as he is at Glastonbury, Fabric in london or gigs in the Caribbean, and so too did Manchester institution Sankeys where he was resident at the legendary club for 2 years. His attention to crafting sets that are dynamic, vibrant and educational form the basis of his sets; taking inspiration from the deepest realms of house, techno and beyond, his sets strike that emotional chord that keeps a captivated audience moving all night long. Production wise, the versatility of his tracks underlie his adroitness as a producer - not focusing on a certain sound but carving a path with a sound he can define as his own. His ability to veer between genres with ease and style is reflected in the depth of releases he’s enjoyed across numerous high-profile labels with works upcoming on the infamous Clone records / UTTU and received extensive Radio 1 airplay on Pete tong, Annie Mac etc. His output is characterized by great dynamic range, rhythmic groove and filled with confident underground dance floor flair; it’s no surprise that he has topped Juno’s Deep House and Techno charts, and received heavy support from aritsts such as Ricardo Villalobos & Laurent Garnier through to modern heads like Dusky, DJ Haus and more typifying his production prowess. His musical range extends beyond DJing and producing, with Furness running two of his own labels: Music Is Love and MIL. Both labels continue to unearth fresh new talent: the former an imprint synonymous with deep, underground house music and the latter inspired by a desire to nurture a sound with more sonic craft, with both labels very much prising quality over quantity. The Music Is Love monthly showcases has played host to some of the best spinners on the circuit, with the likes of Moodymann, Delano Smith, Chez Damier and DJ Deep all playing packed out nights. Furness has also taken the MIL brand outside the UK, including notable label showcases in ADE and around europe.