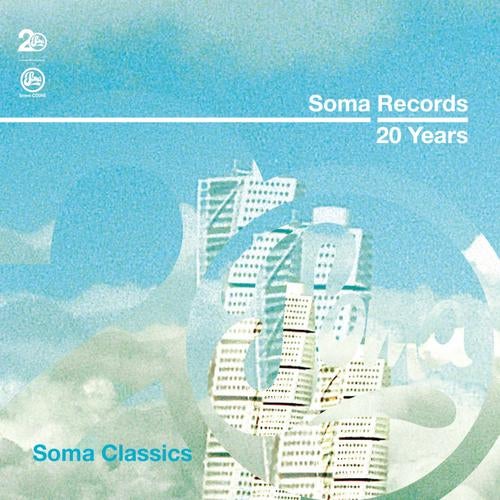 When Stuart McMillan and Orde Meikle decided to name their fledgling imprint Soma Quality Recordings, they were being more uncannily prescient than anyone could have imagined during the heady, post-acid electronic eruption, whose volcanic ash continues to disrupt services and belch up astonishing new talent on a regular basis through to the present day.

Through sheer natural instinct and passion, the word Quality has remained Somas essential mantra, resulting in many of these names gravitating to the label over the last 20 years.
Soma was born out of the insanely euphoric celebrations taking place at the DJ duos club held in Glasgow since a track by Phuture named them and their night Slam. Along with manager Dave Clarke and fellow founder Glenn Gibbons (both still at the helm), they had little idea that, out of the countless clubs and labels flourishing during that magical period, they would be the one still holding strong two decades later, Soma now acknowledged as the UKs longest-running dance label and one of the most consistently-dazzling electronic imprints in the world.
Relentlessly DJing at the worlds foremost cutting edge dance venues, Orde and Stuart have kept their fingers on electronic musics rapidly-evolving pulse, experiencing on the front line what makes crowds scream, dance or cry, constantly pushing the boat out with their work as Slam, while carefully planning and introducing fresh new names to the mothership label.

Above all, they have never forgotten that intoxicating magic, which spawns the strongest memories while changing outlooks, careers and even lives forever. So many of those cavorting on their Glasgow dance floors over the past two decades have gone off to start making their own music; a direct lineage from the punk movement which gripped the Slam boys earlier in life (and which they readily acknowledge with the occasional post-club Clash session), along with other key historic elements, from acid house to New York boogie to Detroits symphonies to Berlin minimal stalkers and beyond.

Compiling a Classics CD that covers 20 years of releases (310 singles and 90+ albums) is not an easy task. There are the obvious tracks that had to be included in such a compilation, like Slams Positive Education, Silicone Souls Right On, Right On and Funk DVoids Diabla. There are others like Daft Punks remix of Scott Grooves and Slams first ever track on Soma Records, Eterna, which quite literally took the dance music world by storm. Eterna was ultimately the track that started Soma Quality Recordings. This was in 1991; the year after remixing the Edinburgh band Botany 5 on Virgin Records, and the year before collaborating with The Orb on the Close Encounters track (taken from their debut album, U.F. Orb). These are quite simply the foundations of both Slam and Soma.

Then there are tracks like Sharkimaxxs (aka Felix Da Housecat) Clashback and Percy Xs X-Traks, which still fuel dancefloors around the world in exactly the same manner as when they were first released (both, some 16 years ago). Joris Voorns Mix of Samuel L Session is (quite rightly) one of the biggest tracks on Soma Records in the last 10 years, so it would have been foolish not to include on our classics compilation. We also had to include the flip of that. The tracks that were never about selling by the million; they were about a time, a place and a state of mind. The Black Dogs Cost II (originally on the GPR imprint in 93, but signed to Soma in the late 00s) was the sound of a time, just like the Desert Storm release, which was first heard in a railway tunnel in Glasgow at one of their many Desert Storm Sound System parties of the early 90s.

Finally there are tracks that are classics by proxy. At the tail end of 2010 we trailed boxes of DATs, pictures and god-only-knows what else to find artefacts of Somas early days. Imagine our surprise when we discovered a tape simply entitled Daft Drive. We hooked up the DAT machine and inserted the tape with the delicacy of a surgeon, pressing play and praying that for one, the tape contained what we hoped, and two, that it didnt chew it like a dog on a bone. In amongst the hiss and crackle, the most monstrous 909 kick drum thudded. Daft Punks Drive track had been rediscovered. Playing through was 11 minutes of Live Daft Punk; freaky vocals, pounding Roland drums & synths and that archetypal DP compression. After standing in silence, witnessing this moment, the track faded off and we heard the sound of the French spoken word that the recording had been made over; the remnants of their parents audio collection. This tape was given to Dave, Glenn, Stuart and Orde (the directors of Soma) on a trip to Paris in 1994, where they were first introduced to Thomas and Guy, two bright-eyed and Techno-bound Frenchman.