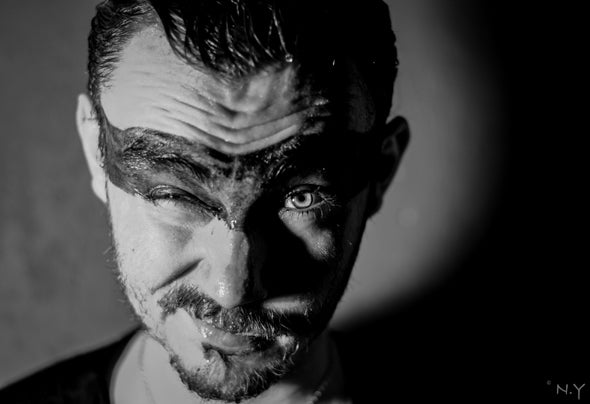 One day a young kid from the Old Industrial center of Aalst (Belgium) was destined to discover and create music. At the age of 18 he found his way to the record stores with a desire to become a musician. With a mother who's teaching violin, a grandfather born in Detroit and himself already playing the piano at the ago of 7, he was bound to end up in music someday. He realised that music is the driving force behind his intuition and he evolved towards the production side of things. In 2006 he gave birth to his debut EP on Toys For Boys Records. It didn’t take long before it was discovered and launched into the playlists of several dj’s worldwide. A unique blend of pumping minimal techno with huge influences of oldskool chicago and acidhouse landed him a release on Marco Bailey’s MB Selektions in that same year. The releases kept following on Andre Crom’s Heimatmelodie imprint, Cologne based label Trapez and again MB Selektions where his track “Octopussy” moved the people on the dancefloor all over the globe. By performing live the energy levels on the dancefloor rise and when you feel that lifting desire you know it’s good. In his records he tries to blend in old school drum elements into a subtle environment of new slinky grooves and all-out raving madnesshave. Music is a performance and therefore it needs an audience. His timeshifting and elevating rhythms are highly appreciated by the crowd, promoters and top DJs`. He received much acclaimed support from people like Richie Hawtin, Josh Wink, Karotte, Marco Bailey, Monika Kruse, Gabriel Ananda, Seth Troxler, Len Faki, Dominik Eulberg, Skoozbot, Jens Zimmermann, Alexi Delano & Tim Xavier,... and played dj and livesets in venues and events such as Tresor (Berlin), U60311 (Frankfurt), OPA (Paris), Fuse (Brussels), Vooruit (Ghent), Kiosk Club (Lille), Aquarium (London), Club Versteck (Dortmund), Lerry Brend (Kässel), Silo, Decadance, Tomorrowland, Kozzmozz, Ultra, Laundry Day, Forbidden Fruit, etc… He had recently picked up a bi-monthly residency in Frankfurt's U60311 and he's maintaining his local position on the banging Thriller parties at Decadance, Ghent. It didn’t take long before the birth of a brand new label came along. Tom Dazing and Gols proudly present their ‘Thrill Recordings’. The first EP ‘On the Rocks’ is to be expected in February 2011. Simply good tracks with lots of love and care because after silence, that which comes nearest to expressing the inexpressible is music.