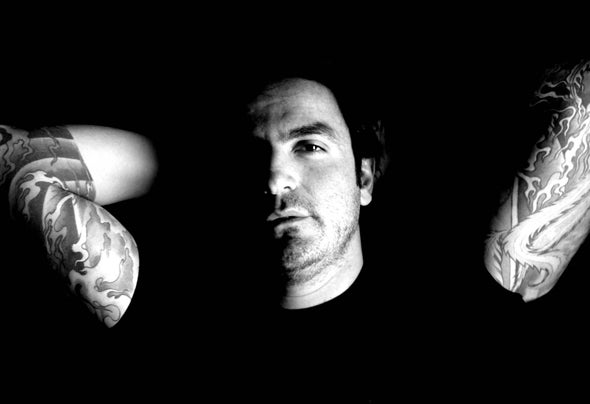 For those of you who can distinguish the difference between a disk changer & a pro DJ when you hear Tengo you realize that there is a true higher intelligence behind the music that’s hypnotizing you & you realize why this industry has come so far. in a world of copy cat pop hit disk flipping posers you do find the DJ that truly deserves a grand stage & your attention. be original have your own sound is what Tengo believes in (it’s better to have a hundred music lovers than 1000 champagn popping socialites that have no interest in the musical process what soever). Tengo walks down in to the crowed after every set to remind him self that he is one with the people not above them but holds a symbiotic relationship that feeds off of each other. We begin the story In the spring of 1997 with the rapid rise of technology, DJ Tengo went out to get his first computer in the hope of building a home studio, so that he may pursue cutting a high quality demo to showcase his eccentric guitar skills and his vision for the next frontier of music. Along with his goals the computer would be his first CD player of any kind witch would inspire him to start up a collection of music that he enjoyed. One night wile out partying At Clementine, a lounge on 8 th street and fifth avenue in Manhattan, he noticed that the owner was spinning that night. He approached him and asked why the host of a party would be playing music and not paying attention to the tedious task of managing and supervising. Soon Tengo would learn why the owner took it upon himself to entertain the crowd. After a brief conversation, Tengo understood the importance of a DJ, for with out the right one you have no party. So he then proceeded to convince the owner to give him a shot at performing there, and explained that he had never spun before but assured the club owner that he knew what to do to get the crowd interested, and knew how to present the music in a fashion that would keep the crowd energized and motivated to dance. So without any thing to loose he gave Tengo the opportunity to prove himself as an entertainer. In the following week, after a five minute crash course in mixing from the security g uard who new the art of mixing, Tengo made his first debuted as a DJ, he delivered as promised, along with exceeding all expectations of his ability, and landed his first gig as a DJ. At the end of the night he was told by management that he was the most exiting DJ that had ever spun there, along with many customer complements & a new confidence in his ability he landed his first Gig. He took his first few steps in to a new world were he could utilize his never yielding imagination for innovation in the world of music. Wile holding down a job as a grip in the film industry, and a gig as a DJ one night a week, he couldn’t stop doing hard labor yet, not until a few months after when another uncommon opportunity arose were he was trained as a DJ in a strip club, this job gave him the opportunity to stop griping and concentrate on his skills as a DJ. He made a life altering career change Wile letting fate push him to a musical path that his heart desired and longed for, leaving behind a steady and profitable job in hope of destiny’s arrival. So for the next few years he perfected his skills in mixing, and collected a massive library of music that ranges from all sides of the musical spectrum, witch is his strong point, Tengo is not proprietary to one type of music, he is deeply rooted in both popular and unpopular music, he believes strongly that in order to contemplate the future of music you need to know the depths of the past. In the next eight years of his career leading in to 2005 Tengo has worked gigs and held residencies at some of NY’s top rated lounges such as Résumé Spinning Hip Hop Rock & House along with live performances playing instruments and Live Sound Sculpting , accompanied by other DJ’s, live sound sculpting is something no one in the industry dose except DJ Tengo. In his eight year career as a DJ, Tengo has made a CONSCIOUS decision to concentrate on producing and spinning house/dance music only. Inspired by such artists as Danny Taneglia Victor Calderon & more. With no more time to loos e and a well-planed mission Tengo’s production tracks started release in 2009 with Nervous Records & continues with UC & Rocit Records shortly after Tengo started Lucid Records with support from some of the top industry leaders. Tengo is currently the resident Saturday night DJ @ world renown Webster Hall NYC nightclub in the grand ballroom since summer of 2009 along with his residency he has graced the stage @ Pacha NYC & M2 all three the cream of the crop in NYC nightlife. And now get ready for the sonic visual & philosophical onslaught of Musical relentlessness for a rapidly evolving generation. Tengo thanks you for your support.