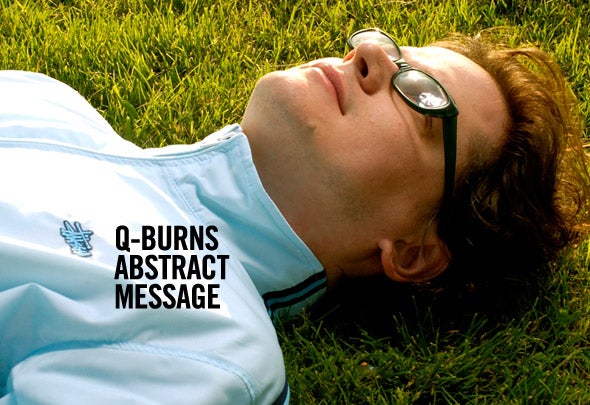 In the realm of dance music, there are few producers that thrive on blurring the boundary between eclectic experimenter and populist ass-shaker as much as Q-Burns Abstract Message. Equally comfortable covering Krautrock legends Faust or dropping his favorite chunky house grooves into the mix, Q-BAM—known to his parents as Michael Donaldson—is indeed the rare auteur. Whether globetrotting as a DJ, co-running the Eighth Dimension Records label, remixing artists like Rabbit in the Moon, Fila Brazillia and Youssou N'Dour, or recording his own original productions, Donaldson is all about the coaxing the maximum soul out of the machine.Based in Orlando since the early-’90s, the former record shop owner and college radio DJ has spent the past two decades developing a sound that is obsessively devoted to the funk. His animated, vodka-soaked DJ sets have won audiences for the well-traveled Donaldson from San Francisco to (literally) Siberia, and landed him primo opening slots for GusGus, Chemical Brothers and Meat Beat Manifesto.However, it’s his playful rhythms, surprising melodic themes and not-so-surprising Eno-esque textures that demand attention. An accomplished indie musician prior to releasing his first single as Q-BAM—the breakbeat noir of “141 Revenge Street” in 1995—Donaldson is first and foremost a songwriter, albeit one that is just as enamored with the sheer power of the groove. With a trusty Roland Juno 106 synth at his side, Q-BAM released three full-length albums via the respected electronic label Astralwerks, including Invisible Airline which featured several collaborations with vocalist Lisa Shaw. He has recorded numerous singles for house-centric imprints such as Brique Rouge, Slip N’ Slide, NRK and of course, Eighth Dimension. Q-BAM was also one of the talented producers on alt-country icon Jim White’s 2001 Luaka Bop release No Such Place. The album cast White’s stark vocals in a wasteland of dusty beats and ghostly slide guitars, with Donaldson’s tracks providing some of its most intoxicating moments.Though his “endless summer” schedule—more than 100 DJ dates annually—and ongoing production projects would seemingly exhaust a mere mortal, Q-BAM rather enjoys this 120-BPM soundtrack. Accordingly, Donaldson and fellow Orlando producer/DJ Atnarko launched the deep house label EIGHT-TRACKS, dedicated to releasing “strange sounds that you can dance to,” says Q-BAM himself. Additionally, house imprint Agave Records tapped Donaldson to throw down a mix CD titled Agave Nectar Vol. 1, available in fine records shops worldwide..Currently, Q-BAM is hard at work with his monthly Invisible Airwaves radio show, studio and label duties, and touring schedule. Recent Q-Burns Abstract Message singles include the Italian-horror film inspired “Chainsaw” for EIGHT-TRACKS, a collection of remixes by Cole Medina of the classic Invisible Airlines track “Innocent” (featuring the vocals of Lisa Shaw), and a revamped “Balearic Chainsaw” featuring mixes by Q-BAM pal Scott Hardkiss. As if there wasn’t already enough deliciously warm and gooey queso already piled high on his plate, Q-BAM is also hard at work recording a slew of tracks for an upcoming mystery project, to be launched sometime within the year.