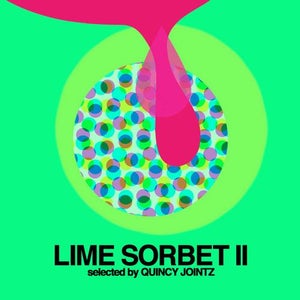 Quincy Jointz has certainly been busy since the last Lime Sorbet issue. Based in Freiberg, Germany, and known to friends and family as Dirk Schafer, Quincy's reputation in the funk-breaks scene has been rising rapidly. Quincy Jointz has produced numerous releases and remixes for the likes of Eighteenth Street Lounge (ESL), Funk Weapons, Fort Knox Records, and Timewarp Music who will be releasing his debut artist album in August 2012. Quincy's also gotten more active as a DJ, playing floor-filling sets displaying his eclectic 'beat-osophy' throughout Europe. This new Lime Sorbet compilation represents the sound of Quincy Jointz' radio program and his current DJ sets through exciting and DJ-centric tracks by some of his brightest contemporaries in the funk-breaks field. Some are familiar names from the previous Lime Sorbet collection, and some are new to the series. All tracks are previously unreleased, and all are funky as hell.

All in all, it's a brilliant manifesto on the state of funk and electronic beatology in the 21st century. Quincy Jointz presents Lime Sorbet 2 whether you're leaning back, head nodding, or jazz dancing at a smokey after-hours joint this collection fits the bill.