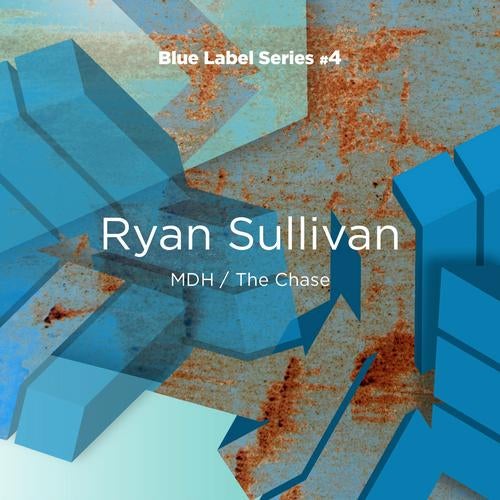 For the fourth installment of the Blue Label Series, Eighth Dimension sets its sights on the burgeoning house music scene of South Africa and an accomplished Cape Town-based DJ/producer by the name of Ryan Sullivan. With singles on various labels (including his own Gut Feel imprint) dating back to 2005, and the recent release of his debut artist album No One Will Ever Know (on Triplefire Music), Ryan Sullivan is certainly no stranger to the recording studio or DJ's playlists. He approached Eighth Dimension with a pair of tough, polished house music tracks that exhibited a unique mix of rhythmic ingenuity and melodic know-how, immediately grabbing the label's interest. The two tracks, leading off this latest Blue Label Series release, are "MDH" and "The Chase." "MDH"'s opening four-on-the-floor kick drum may seem to signal standard house fare, but the cut quickly opens to a more intriguing tone. Warm, scintillating key pads driven by a reservedly funky bass guitar create a floor-pleasing and hypnotic deep house groove. An echoed, percussive synth line lays out an infectious melody countered by a subtle, but enticing guitar riff. It's quite masterful how Ryan Sullivan pieced this one together, and his clear, reverb-tinged production assures a huge, wide sound over club systems. This first track is craftily complimented by "The Chase" which is a building drum work-out featuring intricate percussion over a booming kick. Fuzzy staccato pads increase in volume as the track plays and an eerie bell-like melody chimes overhead. At times things get quite explosive and the synths filter upwards in intensity while still maintaining rhythmic bounce. This one really captured Blue Label Series curator Q-Burns Abstract Message's attention and has been a major highlight of his recent sets. "The Chase" has been remixed by renowned Brooklyn-based producer Jaymz Nylon (Nylon Trax) who lent his signature afro-tech fingerprint to the sound. In an ambitious turn, Jaymz also supplied a new spoken vocal part (accented by his rhythmic chant of "chase chase ") turning the song into a broken beat-ish reflection on chasing "the illusion of a brighter light." Swirling keyboard pads and sustained bass notes give extra 'oomph' to the cut, kept intact in Jaymz's accompanying, pared-down Dub version. Up-and-coming Orlando producer Stereo77 is also on hand for his own version of "The Chase," focusing on the percussion of the track while bringing the tempo slightly down to that of a tropical tribal dance. Synth sounds and ghostly echoes fly through the sonic field, imagining a careful trespass through the rainforest by torch-light. "MDH" is also revisited with Toronto's Iron Horse supplying a sweeping, otherworldly remix. Iron Horse is Marc de Breyne, releasing tracks for his own Pawn Shop Records imprint as well as remixes for a host of others. His version of "MDH" is nearly ten minutes of cosmic bliss, bubbling with spacey synths, ramshackle percussion, ascending layers of bass, and faraway hints of melody and vocal. Iron Horse also treats us to a Drum Mix, which, as you might guess, is a variation that focuses on the thick blanket of percussion that permeates his remix. It's a wild mixing tool for adventurous DJs, closing out Ryan Sullivan's varied and energetic contribution to Eighth Dimension's Blue Label Series.