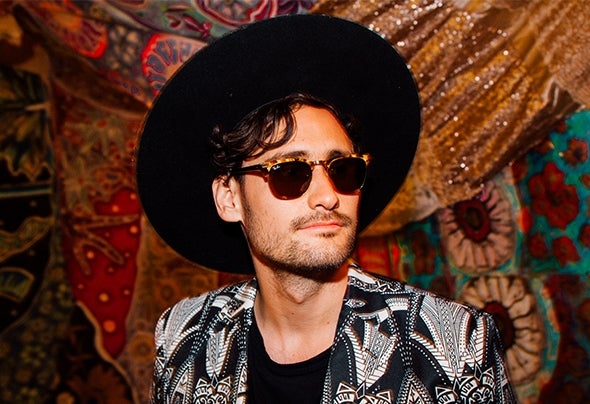 Part desert harlequin, part soul conductor, Mikey Lion is more than a DJ––He’s a freak of nature and a controller of energy. The San Diego-native has earned a dusty mystique over the past few years as the center of the Desert Hearts movement and as a house and techno provocateur with a stage presence that suggests he will ride this wave all the way to the top. If there's one thing Mikey does well, it's get the party started.Lion has brought the mothafuckin' ruckus to the stages of Lightning in a Bottle, Burning Man, and The Do LaB at Coachella, earning nods from Claude VonStroke, Jamie Jones, and Green Velvet in the process. In doing so, Lion and his signature top hat have developed a boisterous voice in the House & Techno scene with strong tribal, hip- hop, and psychedelic elements.In November 2012, Desert Hearts began as a seedy, 200-person renegade gathering deep in the Mojave Desert. The intrepid crew barely survived a set of extreme weather conditions and unfortunate circumstances, but that first party sparked a fire. The entire point of that first Desert Hearts was to create as much love as humanly possible, and now that same gathering has evolved into the darling of the West Coast house and techno scene. The Bi-annual festival is capped at 3500 attendees in order to create the best possible vibe. Built upon beautiful people getting as weird as possible to deep and trippy house and techno, Desert Hearts has already achieved iconic status in the North American Festival Scene.Desert Hearts has given rise to a family of thousands and it's safe to call it a bonafide movement of love. And while Desert Hearts Records launched in 2014 as a totally-free record label, pushes the sonic aesthetic of the scene, the crew’s busy international calendar of bookings has the DH message spreading far and wide. At the center of it all is Mikey Lion, the dusty prince of desert hearts, a beacon of weird far and wide, and one of this generation’s most compelling agents of love.