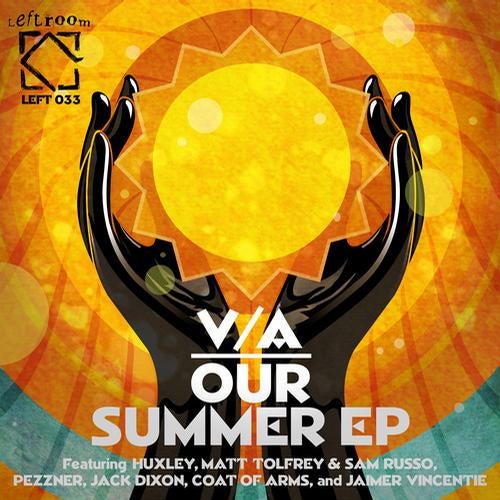 Matt Tolfrey's Leftroom imprint provides a heavyweight V/A release to close of the summer,with contributions from Huxley, Pezzner, Jack Dixon, Coat of Arms, Jaimer Vincentie andTolfrey alongside Sam Russo. 2012 has been a strong year for Leftroom with releases from the likes of Gavin Herlihy, Laura Jones, Sam Russo and Kate Simko garnering love from a wide array of DJs. Scuba, Donnacha Costello, Stacey Pullen, DJ Deep, Dusky and Dan Curtin are just a handful of names that the British label can now count as fans, adding to an already impressive support list. Kicking off with Huxley's sleek, arp-driven 'Failing Upwards' before sliding neatly onto the subtle, punchy and melodic 'Creature of Habit from Tolfrey & Russo, 'Our Summer' is, from the off, riddled with Leftroom flair. Pezzner is at his trippiest with the low-slung funk of 'Need More', which stands out as some of his best work yet (no mean feat for the veteran producer) while ManMakeMusic/Apollo star Jack Dixon makes his Leftroom debut with the unctuous, rounded warmth of modern garage cut 'Spin Drive'. Coat of Arms delivers the penultimate cut in 'One For the Rhodes', an idiosyncratic piece of deep,skeletal funk that joyfully rattles while drawing on a cornucopia of sounds before another Leftroom debutant, Jaimer Vincentie, closes things off with the lurching house groove of 'True Skool'.