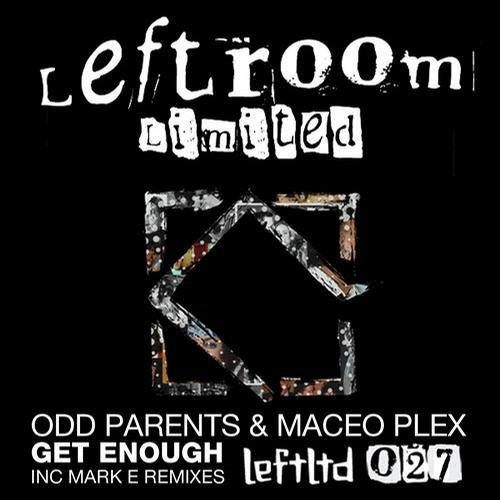 Leftroom Limited follows up a hearty contribution from Waifs & Strays with one of its biggest line ups yet this October with Maceo Plex teaming up with Odd Parents and the ever-quality Mark E turning in two remixes. Much like Ellum Audio's Maceo Plex, Odd Parents are US expats now residing in Spain and, having released on Ellum earlier in 2012, have become part of the label's family unit. This is the second Odd Parent's collaboration this year with the duo's remix of D.Ablo & Eric Volta alongside Danny Daze creating enough of a buzz to tempt Maceo Plex into the studio with the Philadelphia pair for 'Get Enough'. 'Get Enough' comes on strong from the off, with an arpeggio bassline giving off a massive portion of elastic funk while an arsenal of 'floor focussed drops and audio trickery are employed to undeniable effect throughout. Looped, chopped and stretched vocals all play their parts in adding to the hooky nature of what is yet another dancefloor bomb for all parties involved. No stranger to the concept of discoid electronics, Mark E cooks up two remixes of 'Get Enough' for Leftroom Limited. The Ghostly artist and Merc honcho channels a hip-housed Chicago delight in his remix - all resonant keys and glorious, emotive strings making for one of his most epic sounding works to date. The Mark E Future Doom remix is an insistent, tightly looped affair that bursts out of the gates with high hats blazing and fever-pitch builds which offset playful, deep melodies and blissed out vocal snippets. Old school structuring with a distinctly modern palette of sounds, it's another arresting interpretation from a producer who knows how to balance and control aggression perfectly.