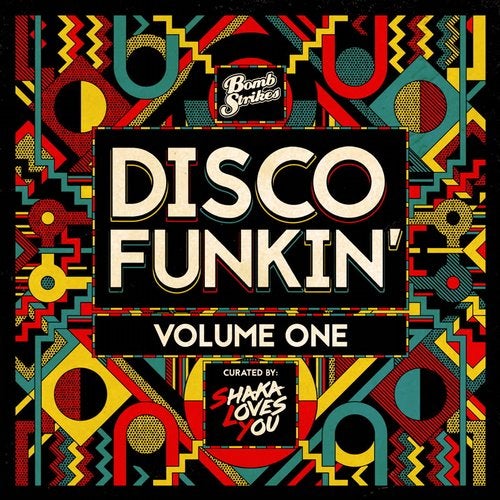 Bombstrikes continues to expand its musical horizons via their growing series of expertly curated compilation albums with this, the first volume of Disco Funkin'. For a label so at home in all things Funk related, it was always going to be something special when they added Disco to their focus whilst of course keeping the funk very much at the core. And who better to curate the first album than the fast rising stars Shaka Loves You. Having gained the Craig Charles seal or approval on air many times and also supporting legends such as the Jacksons and The Sugarhill Gang, the Glasgow duo have already shown their pedigree for such music. As recent releases from the Shaka boys show, they are carving out their own sound within the scene and always deliver music of the highest quality.

The duo's skills at seeking out killer grooves are very much on show here with the album's track listing reading like a 'who's who' of the scene. Avoiding the obvious route and disco cliches, the pair have assembled an exquisite range of music spanning across many elements of forward thinking disco and funk. Featuring a selection of album exclusives including new material from the boys them selves, there are also some stone cold classics and new discoveries from the likes of Dimitri From Paris, The Reflex, Kraak & Smaak, Lack of Afro and Sebastian. Further highlighting how the compilation has such a high calibre of artists and a diverse take on the sound is shown by the inclusion of not one, but two members of legendary Hip Hop group Jurrassic 5, in the form of Chali 2na and Fullee Love (Aka Soup).
There is more than enough music here for both the most ardent disco fan but also the more casual listener as well. If the track listing wasn't enough already there is also a DJ mix of the album to take the listenor on a journey and keep things grooving. This is a heavyweight compilation and sets the bar extremely high for what is follow!