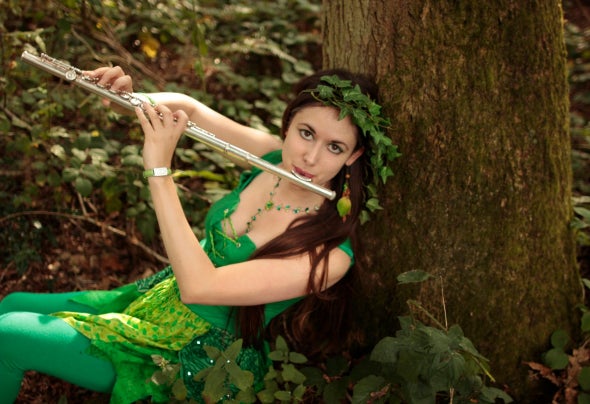 Spinney Lainey is Lainey Round from England, progressive psytrance producer and classically-trained flute player and performs her own music with live flute. Her passion for music began at the age of eight, when she began to learn the flute. She came into the world of psytrance on a mission to express her own continued personal story of healing from many years of severe chronic illness, transcending suffering and healing spiritually. It is her passion to share her story with others and in doing so, intends through her music, to bring others the hope, light, love, healing and peace that she found, as well as making them dance and be free! Having graduated with a classical music degree back in 2001, Lainey began experimenting with many different musical styles, forming different projects. During this time, she developed her passion for psytrance and was first discovered after posting a video on Youtube of her busking on her flute to 'Basic' by Zyce at Piccadilly Circus (this can be found on her Youtube channel - link below). The video caused a sensation and went viral. After seeing this video, Zyce asked her to record a flute part for 'Basic' and a remix was made, which can be heard on her soundcloud page. She went on to work with Zyce on 5 tracks in total, including the EP, 'Fluting', which was number 1 on Beatport. Lainey has continued to work with many other producers in the scene, including Lyctum, Flegma, Mindwave and Daniel Lesden. Spinney Lainey is one of the fastest emerging female producers in the scene. She has 85K followers on Facebook and of her solo releases have performed extremely well and have all reached well into the top 10 in the Beatport charts with her most recent solo release, New Beginnings reaching no.1. https://www.facebook.com/SpinneyLainey https://www.youtube.com/user/spinneylainey/videos https://soundcloud.com/spinney-lainey https://instagram.com/spinneylainey