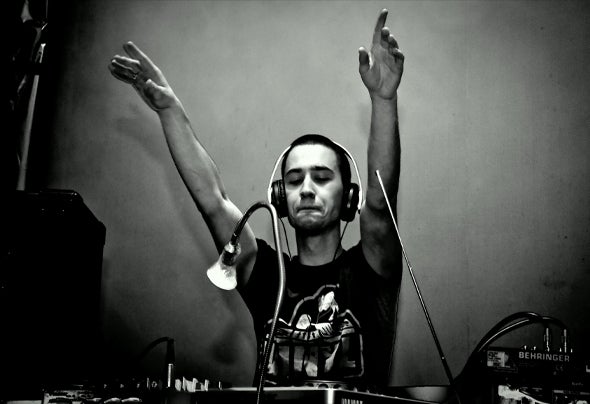 Valery Lazarev (Mark Hartigan / DJ Lovilaz) born in 1987 came from the city of Chelyabinsk. His passion for electronic music started to show in 14 years. Like many he began with the simplest of programs, but after a while he realized that the possibilities of this program is too limited to, so I started looking for something new.Their first drafts, and this is how he describes his first work, a little shamefacedly, Valery show guru electronic scene, one of them was Michael True. Get a bunch of instructions and comments, Valerykrapot livo developed. Each of his next job t o t he next level. Gradually he began to fill his hand in the writing of tracks, then it's sound quality. At that time, Valery worked under the pseudonym DJ Lovilaz and recording tracks in a style popular then: Electro. Later, he met wit h Alexander Popov, Dimauro (dimauro.promodj.ru), who invites him to nabirayushuyu while group turnover Undersound Promo (undersound.promodj.ru). In posledsvii group of four musicians recorded some personal tracks and a couple of remixes, but because of the difference in views on club culture group disbands and everyone started his solo career with renewed vigor. In this connection with Alevsandrom Popov is not int errupt ed, but on t he cont rary, t he guys are working t oget her t rying t o help each ot her.After the collapse of the group met with Valery Eugene Semenov (DJ Johnny Beast - djjohnnybeast.promodj.ru) and wrote to him three remixes of tracks: Wishland, Are You Ready?, Mahmed. What has all three remixes come in singles and compositions are published by foreign labels. The most successful remix of the three said Valery competitive remix Mahmed. This work is completely different from all previous works of his, plus the entire remix this hit single, but still a few compilations.Parallel Valery met with two outstanding musicians George Marchenkova (Arcada - djarcada.promodj.ru) and Vadim Getmanchuk (Vadim Miner - miner.promodj.ru). In the process of communicating with them, he is fond of Progessive House sound and began writ ing t racks and remixes in t his part icular style, leaving the Electro behind. He pischet some remixes for some of Vadim and to George, with some of them entered the domestic leblah. It lasted until 2010, until such time as long as Valery did not realize that something must be changed. He was just marking time in one place and at the same time there is no development, so he decided on a radical change of image, style and sound. He obrashaet their attention on an emerging style Tech House and Techno. Well, in order to fully enter intot he new image he t akes a new alias MARK HARTIGAN, thereby trying to show that the old is all over.At the moment, under a new alias, Valery EMS Single Flower Road, as well as recorded several remixes in different styles, but that he was not going to stop. Working constantly over the mixing of styles, he gives his work its originality and singularity. Musical preferences: Progressive House, Tech House, T echno.