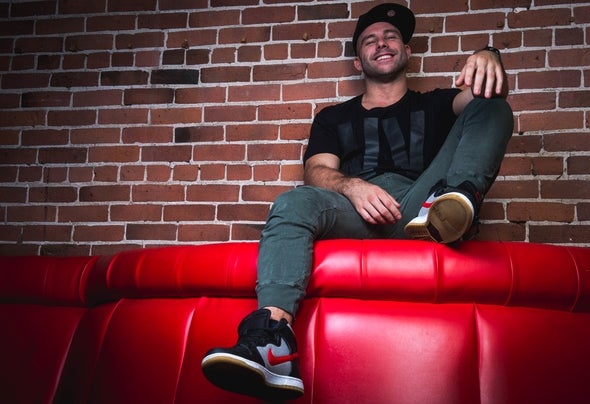 Much like a successful business; Scott James is a brand synonymous with quality and growth. Consistent high-end performances paired with an evolving global influence make James one of few rising talents destined for a long and successful career. Scott’s continuous growth has brought his music to the international forefront and has landed him among the ranks of the world’s elite producers and DJ’s.In 2013, Scott appeared on the cover of DJ Mag Canada, had over 8 releases on Beatport, a #3 release on TrackitDown and played Escapade Festival in Ottawa alongside Tiesto and Quintino.Since discovering his passion in 2007, Scott James has gone from being a university house party DJ to climbing the ranks as one of Montreal’s elite homegrown talents. In 2009, Scott landed on the resident DJ roster at Circus Afterhours, consistently ranked among the world’s top clubs by DJ Mag. Quickly after joining the Circus family, Scott James rose to become one of the venues top residents, getting the chance to play alongside hundreds of international acts like Mark Knight, Benny Benassi, and Ben Gold, resulting in bookings at premier Canadian festivals such as Escapade in Ottawa and Black & Blue in Montreal. With a versatile and technical DJ persona that spans from dark underground progressive, to bright big-room bangers, Scott is a safe bet on almostany event lineup.After proving his skill in the booth, Scott turned to production in late 2010 and has been developing an infectious progressive sound ever since. Now into double digit releases on Beatport, with records signed to several global labels, Scott’s music is starting to spread and gain support from major industry artists like Jerome Isma-Ae, Weekend Heroes, and DJ Paul Thomas. His schedule is now filled with exciting collaborations and contracts with one purpose in mind: deliver outstanding music and a strong brand to match.Scott James’ resume continues to grow with every new achievement outdoing the last. From making songs, to playing shows, to his influential Synergy radio show series, each new endeavor exceeds the previous one. With such outstanding growth, if Scott James were a business venture, he would definitely be a company worth investing in.