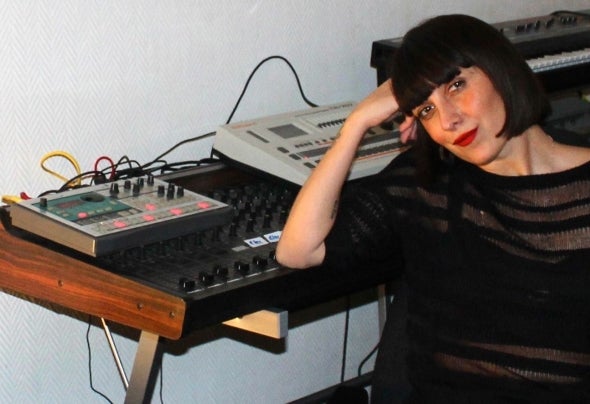 Bloody Mary encompasses all aspects of an established electronic musician: she’s a vinyl DJ, she performs as a hardware-only live act, she’s a producer, and she’s been running the label Dame-Music since 2010.The French-born, Berlin-based artist likes to be kept busy. When she’s not caught up running between airport gates, she’s usually locked away in her gear-heavy studio, continuously mastering her art as a producer.After relocating to Berlin in 2005, it wasn’t long before Bloody Mary’s career as a DJ was put on the international stage. Nowadays, her name is easily recognizable in the worldwide electronic music scene, having rocked festivals and clubs as both a DJ and analog live act for over 10 years.In 2010, Bloody Mary started her own vinyl and digital imprint: Dame-Music. To this day, the label has had over 37 releases (featuring a variety of artists), and has hosted numerous label parties across Europe.As a producer, Bloody Mary has released countless records on Dame-Music over the past 8 years. Since 2017, she decided to branch out further, releasing her music on Josh Wink’s Ovum Rec., DJ Pierre’s Afro Acid, and Tim Taylor’s legendary UK techno imprint, Missile.Her unique musical taste and elegant on-stage presence have seen her feature at festivals such as Movement Detroit, Piknic Electronik Australia and Barcelona, Intro Festival Mongolia, ADE, Sonar and WMC Miami. She has also graced the decks of world-renowned clubs like Fabric London, Space Ibiza, Panorama Bar Berlin, Smart Bar Chicago, Tresor and many more.