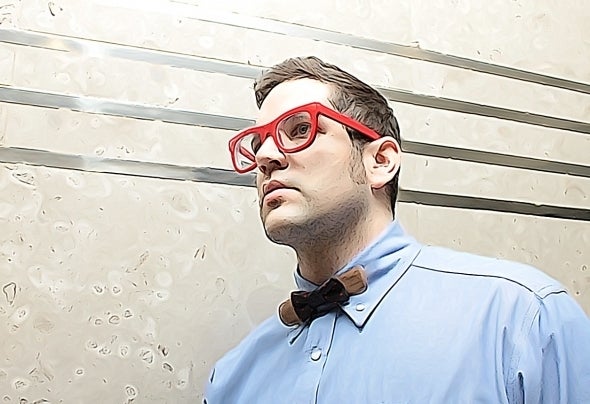 Andrew Emil has been a respected fixture and familiar face in Chicago’s vibrant and diverse music scene for over a decade and a half. A concert-trained percussionist since age 11, Emil earned a chair in his native Kansas City Symphony, but eventually moved to Chicago in the late nineties to attend Columbia College and study audio engineering and music composition. It was during this time that his passion for all forms of art, including audio and visual, led both Emil and his brother Erik Christian to begin organizing and hosting gallery events that integrated sound, graphics and graffiti. The result was a series of parties that fused a multitude of artistic mediums into one all- encompassing culture of creative expression.For Emil—who has been deeply entrenched in Chicago’s thriving house music scene since its heyday in the 1990s —such projects embodied what he considered to be the future of Chicago’s claim-to-electronic-music-fame. Not surprisingly, they also served as the impetus for his decision to develop a new imprint of his own: four play music. These days, Emil’s sound reflects an eclectic and mature marriage of classic and contemporary elements of Chicago house, infused with the jazz and soul undercurrents that have been with him since his early days as a budding musician and sound engineer.One of the earlier innovators of the “Jackin House” genre under the Broadway & Wilson moniker with Jeff Bloom, Andrew is never content to stay in one place or style of musical thought for very long. He spent 2013 finishing a full- length Change Request LP (Tangible Illusion) and new music as Broadway & Wilson. He also developed and fine- tuned a new moniker with very dear old friend: After Monday (the duo consisting of Emil and his longtime cohort, Chicago house institution, Gene Farris). Andrew is touring in 2013/14 to promote his Change Request LP, with the first single featuring the iconic Chez Damier, on Glenview Records. He is the only recording artist to do production work simultaneously for Derrick Carter’s Classic Music Company, Mark Farina’s Great Lakes Audio, Gene Farris’s Farris Wheel Recordings, and four-time GRAMMY nominee Steve “Silk” Hurley’s S&S Records. As an artist who doesn’t underestimate the value of constant growth and transformation, Emil has managed to adeptly morph and keep nimble pace with his city’s ever- evolving music scene. Not only has he put out releases on some of house music’s most elite labels, including OM Records, Seasons, four play music, Farris Wheel, Gallery Music Group, Look At You, Alphabet, .dotbleep, Smooth Agent, Kompute, Roam Recordings, Industry Recordings, Classic, Panhandle, and Cafe Del Mar Music, but Emil has also managed to achieve what so many other artists cannot seem to do while bogged down in today’s competitive, played-out scene: He has sculpted a sound that is unmistakably his—in origin, cadence and frame of reference.Today Emil remains one of Chicago’s most respected and lauded DJs and producers. With numerous productions that have landed on countless Top 100 charts, a notable discography and legitimate DJ resume, and—perhaps most importantly—the unwavering support of Chicago’s many prominent local house music icons, Emil stands out as his own man and a true talent amid a crowd of old-school house heavyweights.Change Request is simply a compilation that consists of an innovative amalgamation of Emil’s impressive range of musical influences. His latest and greatest incarnation of his musical chameleon self. Change Request is a still-evolving project that has been a long time in the making. As Emil has honed and fine-tuned his ear and his technical skills via a multitude of professional composition projects ranging from orchestral and film, to TV and varying genres of electronic music (most notably, Chicago house), he has allowed the concept of Change Request to develop organically.At the root of it all is Emil’s longtime passion for Rhythm and Blues. His ultimate vision for Change Request is to use it as an avenue for his own personal re-working of one of his most revered musical genres. Put simply, he wants to revolutionize his beloved R&B and Jazz by augmenting it with the best qualities of his other true love: house music. With Change Request, Emil intends to create Rhythm and Blues music that is as danceable as it is introspective—a contemporary extension of R&B/Jazz that tells cultural urban stories through subtle, dance-inducing sounds.Andrew Emil has worked on projects for the following labels:four play music | OM Records | Seasons Recordings | Gallery Music Group | Classic Music Company | Farris Wheel Recordings | Look At You | T RAX Records | Alphabet Music | Panhandle Records | Balance Recordings | Vizual Records | High Note Records | Industry Recordings | Cafe Del Mar Music | S&S Records | Revolutionary Music | Meltin Funk Records | Coyote Cuts | Great Lakes Audio | .dotbleep Recordings | Tequlia Trax | Innate Soul Recordings | White Beard Records | Market House Meats | So Much Style Recordings | Kompute Music | Smooth Agent Records | Sheer House Music | Beaubar Music | IDJ | Sampled Detroit | EsNtion Records | Forever Soul Music | Juiced Music | Cabbie Hat Recordings | Roam Recordings | Frequency Spectrum | Ae’s Dub Editorial | Fresca Recordings | CHFM Records For booking information contact: Nneka Gryffyn nneka@aptentertainment.com www.andrewemil.com www.fourplaymus ic.com djandrewemil@hotmail.com