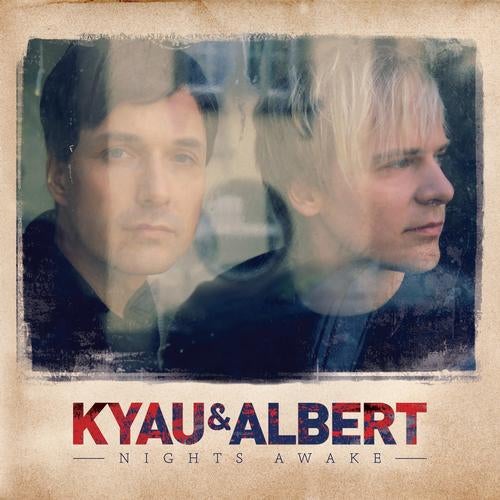 Nights Awake is an album for dreamers, believers, and people whose minds and hearts reverberate with the collective energy that is dance music. Taking listeners through a tour de force of emotions, Nights Awake is exactly what an artist album should be. Epic in its scope and exceptional in its delivery, Kyau & Albert have woven a perfect sonic tapestry that transcends typical dance music confines to reveal the duo's true musical brilliance. Nights Awake features 15 songs ranging from beautifully emotive love songs to full on, hands-in-the-air club anthems that will certainly dominate dance floors around the world in 2013. Fans will surely recognize "A Night Like This" and "Another Time"; two massive hits that were both in heavy rotation for much of 2012 on satellite giant SiriusXM [BPM]. Utilizing their skills as songwriters Kyau & Albert have crafted a timeless album that fans of electronic music, no matter their genre of choice, will absolutely fall in love with. Powerhouse collaborations abound on Nights Awake such as; 'We Own the Night" with Stoneface and Terminal, "Euphonia" with Ronski Speed, "Could You Fall" with Adaja Black and "Robotron" with Marc Marberg. Impressive by any standards, but these collaborations are merely icing on the cake of this legendary release. The passionate resolve in Albert's vocal delivery married with the duo's enigmatic and enduring songwriting skills are the true heart and soul of Nights Awake. Listeners will be swept up in the emotional current of these masterful storytellers and become intertwined in the prose of unrequited love, confessions, beginnings, endings, acceptance and the unbridled release of all these things on the dance floor. After all, this is really what it's all about! Nights Awake is the duo's third studio album and the culmination of one and half years of studio work and countless demo testing to audiences each time they played until finally they felt it was exactly the album they had envisioned. You can absolutely feel the musical substance of this album, it has weight and raw passion to it. This is a real triumph for electronic music and an album that many insiders are calling their best work to date. Kyau & Albert have unequivocally raised the bar on what a dance music album can be. This is love a story. This is a broken heart. This is the connection we all share put to music. Play it once and it will forever become part of you. It is a rare feat to embody the sound and feeling of a moment in time, to reflect and connect so purely with an audience. Nights Awake is not Kyau & Albert's story, it's yours.