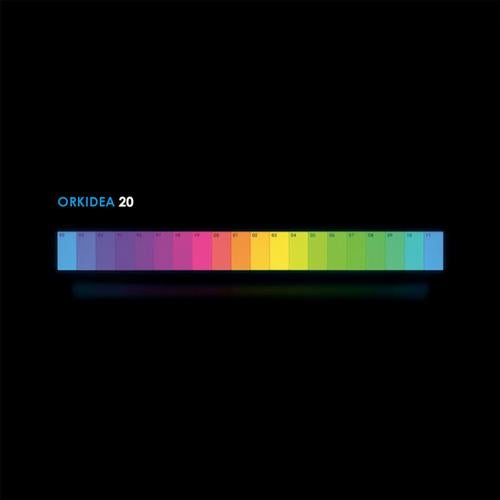 '20' celebrates 2 decades of music from the Godfather of Finland's ever-flourishing trance scene. Tapio Hakenen, better known as DJ and master-producer Orkidea's new long-player takes a spellbinding episodic look at his personal sound experiences throughout the last 20 years of trance history. Enter the world of 'retro-futurism'. Enter Orkidea's world. Possibly the greatest ever unsung hero in the genre, over a 20-year trance mission, Orkidea's always been the man who's resolutely let his music do the talking. In spearheading the rise of Finland as a force to be reckoned with on the global trance stage, he paved the route for acts like Super8 & Tab, Darude, Alex Kunnari, Joonas Hahmo and numerous others to break into the scene. Notably Paavo Siljamaki of Above & Beyond cited Orkidea as one of the reasons he started making trance music on the TATW radio show. '20' aims to provide what Orkidea terms a "retro-futuristic" vision of trance music. Having played trance since its earliest dawn, it's an area he's as well versed in as any. The album re-examines themes and sounds spanning two decades and recalibrating them with the most up-to-date studio tech now available. It shines a light into lesser-known corners; there's nothing that can be considered obvious on '20'. Where he references or revisits the classics, they are of the double-deep underground variety; the tracks that Tapio considers to be the real anthems. His third long-player (following 'Taika' and 'Metaverse') weighs anchor with the pacific equilibrium of 'Beautiful'. With its profoundly progressive sound-bed, lithe synths and spoken word vocal (that many will recognise from a famous space saga), it stands as a brilliant overture to the album. Der Dritte Raum's 'Hale Bop' is considered by many to be one of the most in-the-know trance tracks ever, often discussed in hushed, revered tones in chillout rooms and on forums. Alongside fellow Fin JS16, Orkidea has reduxed 'Hale's sensational, elevating riff - boosting up every element of the 1998 production to make it afterburn on today's floors. Likewise 'Sun Down' flashes back to 1993, and sees Orkidea rebuilding Sven Vath's immortal Eye-Q classic in mesmeric, hypnotic fashion. If Orkidea and Solarstone's 'Slowmotion' track paid ear-service to Sasha and Digweed's Renaissance times, then its sequel 'Slowmotion II' will surely do the same for Mike Oldfield. Its looping, spine-tingling, filmic bell-chime melody locks the attention before finally blooming outwards into a powerful trance odyssey. That provides a gateway to Orkidea's remix of Art of Trance's epic, dramatic 'Chung Kuo'. Itself a cover of Vangelis' track, it's pulsates wildly and notably features not a single breakdown throughout its entire runtime! 'Tw2nty' - the album's title track - grafts bigger room mentality to a prog-trance backing, culminating in an enormous stabbed riff and soaring pitch bent sirens. As the album hits its final third, so '20's gears shift noticeably upwards - moving away from prog-trance ground and into more rapturous areas. On Way Out West's 'Killa' Tapio effectively 'reworks his rework' of Nick Warren and Jody Wisternoff's dub-vocalled floor-smasher - tweaking and retouching his remix 6 years on especially for the album. 'Hot Trigger' meanwhile is a fast moving peak-time floor assault that uses running bass, hard claps and hats and holds back a knockout blow for its big post break moment. Crowning Orkidea's '20' album is his new mix of 'Unity'. The track that started it all for him, it set an enormous precedent for his production career and was in effect Finland's first trance release. Having been champed by the proverbial cross-section of DJs on its original release (including Sasha, Tong, Oakenfold, Warren, Seaman and numerous others), its elite legacy lives on with his special 15th Anniversary remix of Unity, which expands the track into a jaw-dropping 10+ minute soundscape. If you've waited until now to discover the mastery or Orkidea music, the 11th day of the 11th month of the 11th year with your best opportunity yet. 20. Don't miss it.