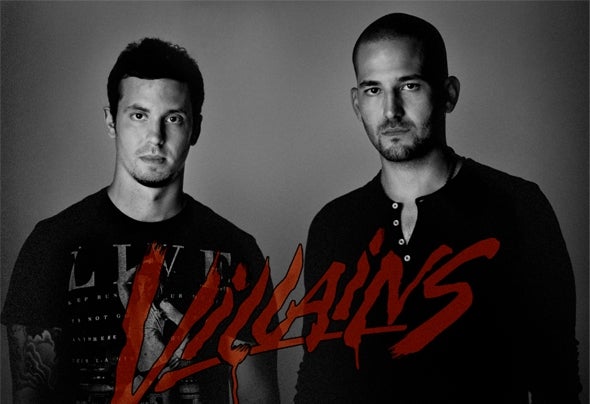 "LA’s Villains are making a lot of noise in the electro scene and spreading their music to the underground and mainstream alike. The production duo consisting of Mad V and Koncept met back in 2002. After years of working on solo projects in the LA Drum and Bass scene, they started working in the studio together. It took only a few months of turning out flawless bootleg remixes and dance floor filling original productions before the offers to DJ all over the world began pouring in. Villains have come a long way in a very short period of time. In just under four years of existence, Villains have produced official commissioned remixes for the likes of Bloc Party, Britney Spears (the highest selling remix of “Circus” to date on iTunes), DJ Felli Fel (feat. Diddy, Ludacris, Akon and Lil Jon), N.A.S.A., (feat. M.I.A., Santogold and Spankrock), Lykke Li, Shakira, Dragonette, The Bravery and many more. More recently, however, the duo have increased their focus on completely original, quality productions. The single, “Victims featuring Whiskey Pete”, was signed and released by the number one independent electro label in the U.S., Dim Mak, and has received rave reviews. This is only the tip of the iceberg for the Villains. After officially signing with Dim Mak in 2010, the two have begun working on several remixes for the label and a handful of originals set to be released in the very near future. The most recent being their 5 track EP entitled, “Control The Future” set to be released in early fall of 2011. This is only the beginning for Villains and there is no end in sight."