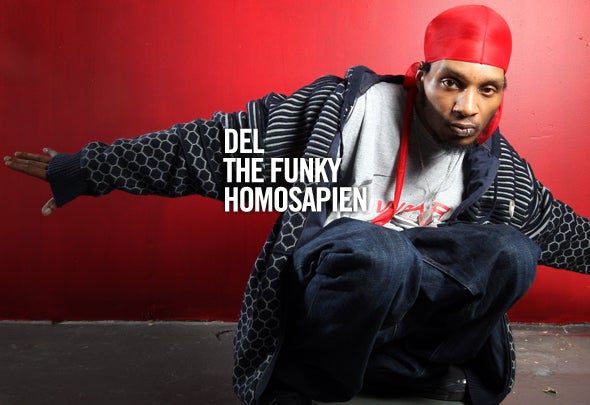 Since 1990, when he made his auspicious debut on cousin Ice Cube's classic Amerikkka's Most Wanted, Del the Funky Homosapien has set the benchmark for advanced rap lyricism. His output for Elektra Records --1990's I Wish My Brother George Was Here, 1993's No Need for Alarm, and Future Development (shelved at the time, and later released on Hiero Imperium) – was hugely influential, laying a foundation for countless other MCs to follow. At the dawn of the century, Del was incredibly active. His 1999 album, Both Sides of the Brains, sold in excess of 100,000 copies. Deltron 3030, a science-fiction adventure he orchestrated with producer/auteur Dan "the Automator" Nakamura (Dr. Octagon, Handsome Boy Modeling School) and visionary Canadian turntablist Kid Koala in 2000, also sold over 100,000 units and became a fan favorite. Del also appeared on the first edition of Gorillaz, the "virtual" cartoon band created by Brit-pop legend Damon Albarn and Tank Girl comic book artist Jamie Hewlett. As the rapper on the smash single "Clint Eastwood," Del helped turn Gorillaz' self-titled debut album into an international success. Ironically, Del now believes that his work from that period was too complicated. "Lyrically, I was stretching boundaries," he says. "It was dope, but I felt like it was lacking substance. … I'm not saying the record didn't have no substance at all, but I felt like a lot of people were, like, 'It's dope, but I don't know what you're trying to say to me.'" So for the next several years, Del virtually disappeared from the scene. Always a voracious reader, consuming history tomes, how-to guides, technical books and philosophical treatises alike, he taught himself music theory, a complex series of lessons that explains the mechanics of music and how it actually works. His years-long study of a discipline that most "pop artists" never bother to learn – and is usually the province of jazz, classical and repertory musicians -- speaks to his dedication to his craft. Del used music theory to make his recordings simpler and more powerful. As a result, the songs on The 11th Hour are bracingly direct. Opening with "Raw Sewage," it is Del reduced to his battle-rap essentials, rhyming "auditory canal" with "storing a file." "I'm a scientific thinker, but it ain't that kind of flex. Like, shit be seeming like its so damn deep, and it really ain't that deep," explains Del. In his raps, Del "breaks shit down," interpreting complicated situations and people, and even himself, into ideas that everyone can understand. It's his ability to use razor-sharp words to explain his thoughts, however, that make him such a brilliant artist. "I love making music. It's more of a habit than anything. It's just something I do to release the stress – making music probably more than writing rhymes. Writing rhymes helps me express myself, too, but there's a lot of stuff I can express with music that I can't express with words," says Del. "I grew up listening to certain things, primarily Parliament-Funkadelic. It gave me a certain feel, and I feel like I want to capture it. Not copying – I don't want to copy Parliament-Funkadelic and any of the other bands I enjoy. But I do want to be able to do that in my way," he adds.