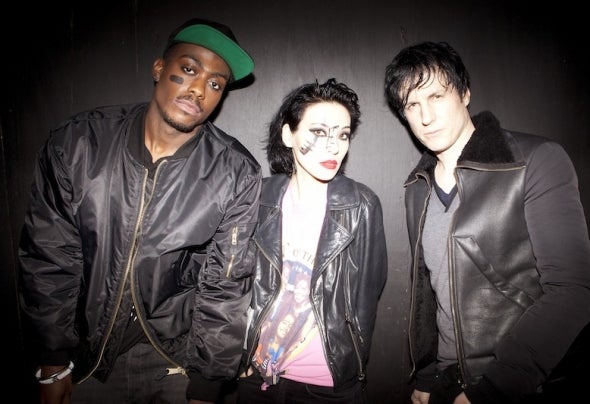 In the late 90s ATR was seen as part of the “electronica” genre, but in reality the band had nothing in common with it. It was too avant-garde, too radical in its views and statements, simply too loud and noisy to fit in. The original conception was Alec Empire’s. It was a unique line up, almost superhero like, and when Hanin Elias, Nic Endo, Carl Crack and Alec hit the stage in some cities in the South of the USA, the mixed race, mixed sex image of the band provoked people before they even heard the music. A female vocalist like Hanin who screams about police violence and revolution, and Nic Endo who was in control of all electronic gear on stage and sent earthquakes of sound waves was simply against all rules of rock and techno music. They opened many doors for female artists to follow at this time. Additionally, the band states that “we were so bored with the music scenes and all genres we had to invent our own: Digital Hardcore. We were asking ourselves, why were all bands looking back in time to get ideas? For us it was a thrill to experiment with new sounds and destroying traditional song structures. The music was a collage concept, but the challenge was to make it sound together and not like some sort of cross over. The attitude was punk, but the sound wasn’t, but had integrated elements of it”. Alec Empire who produced all their albums always had a wide interest in music and made many different sounding records in his career. He is known as the cutting edge remix producer of his generation who has worked with anyone going from Primal Scream or Mogwai to Mark Stewart, Bjork and Rammstein. The Atari Teenage Riot sound was no accident, it was his intention, his plan, and it annoyed a lot of people, that’s for sure. Even now the chances are if you’re over thirty you probably won’t get it. ATR are now a trio with new member CX KiDTRONiK on MC duties, sharing the stage with the original line up of Alec Empire and Nic Endo. This addition of CX is reflective of a new record (Is This Hyperreal?) that is mapped by socially conscious lyrics; angst ridden punk rock riffs and throbbing 909 drum machine patterns.