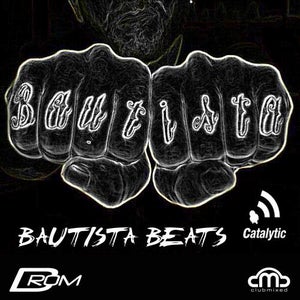 Bautista Diaz found on his birth certificate), delivers a quite mesmerising mix

on ?BAUTISTA BEATS? that, whilst edging toward minimalist and melancholic late-

night vibing, based on hard and deep tech-house sounds, is nevertheless

One chillingly ethereal and thrilling musical moment is created by an organic,

Martin Patino?s ?Tu?, or echoes of the 80s techno Body Music of Nitzer Ebb might

be imagined on Trulz & Robin?s ?Gay Boys?... It?s a mix that refuses to be

Luis has been bouncing around cosmopolitan island locations for most of his life;

with origins in the Canarias, a move to the UK, then, more recently, planting

firm roots in the summer capital of world clubbing ? Ibiza.

The fluid movement of people ? the rapid churn if you prefer ? in such places

ensures that tastes and trends, in areas such as music and fashion, quickly and

continually evolve. This environment has naturally influenced the outlook and

approach of Bautista, him being as versatile as he is professional. And the word

?professional? is not used here merely to describe him having been paid for a DJ

gig, or a production, but in the sense of him having enjoyed an extensive formal

engineering, organ and bass ? he can be classed as an actual musician, no less!

with a number of local bands, though from the mid-90s - by which time he?d

relocated to England ? his immersion in the exploding club scene nurtured an

Initially Bautista / LEDiaz took on roles as both club promoter and DJ, with

events such as Enjoy Entertainment, Techno Breed and The Rocka. More recently

he?s now seen and heard all over the continent, with contemporary club and

festival appearances including Space, Usuhaia and Pacha in Ibiza, Nature and Le

Garage in Madrid, Zen Club and Razzmatazz in Barcelona, BBK in Bilbao, Pulp in

Music in Lanzarote. He?s even spun at raves in Goa!

Extensive production liaisons include being half of Oink! Oink! with David Kano

(Cycle / Krakow), part of MASK with Alex Bruges (Stereoskop), and of Robopimp

(Catalytic Records) with Dave Rodriguez. He further has a label manager role for

the Iberian Peninsula on behalf of Chicago?s Real Estate and Elephanthaus labels,

for Appetizer from Spain, for Boxon Records of Bordeaux, plus for Warner Music

As a sound engineer, Bautista has worked on projects for Michel Camilo, Fernando

Tomas Brotons, Four Television, The Other, the Barcelona City Orchestra, the

National Youth Orchestra and the Community of Madrid...

Add to that yet more roles in Ibiza, where Luis is sound engineer for Funktion-

One, does facility design and sound systems for Pro Audio London, plus for Ibiza.

Global Radio, where he additionally presents the ?Catalytic FM? radio show.
Sometimes he even sleeps? Or is that just gossip?