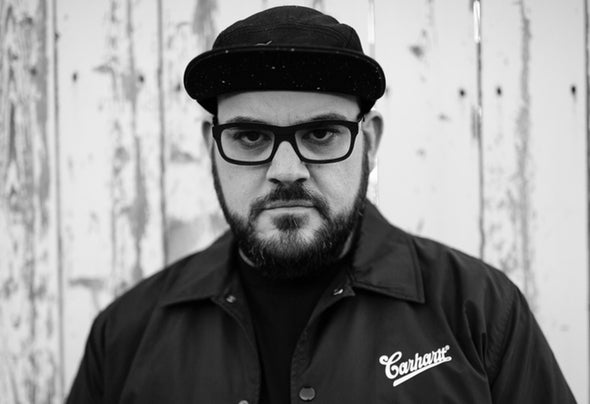 For those who want to delve into the Detroit electronic music scene, the journey would be incomplete without an exploration into the musical creations by one of Detroit’s best: Chuck Daniels. His passion for music began at an early age while listening to the vinyl hits of the 70s and 80s on his dad’s turntable, soaking in a smorgasbord of musical styles. He remembers his love of the 90s at Record Time and Melodies & Memories, where he eagerly waited for the latest and greatest releases to emerge. Unlike the media frenzy of the 21st century where music can be accessed at one’s fingertips, Daniels credits these stores for their vital contribution to the culture of the times and the dissemination of music to the public. On his travels through many different genres, Chuck was then exposed to the sounds of soul. Imbedded in soul music are roots of African-American gospel music, rhythm ‘n’ blues, and jazz, and so this too became part of Chuck’s steady diet. All this, together with influences of techno, New York and Chicago house, and the rich sounds of music legends like Stevie Wonder and Steely Dan, contributed to Daniels’ immersion into the melting pot of popular music. Daniels’ deep-seeded love for music, coupled with his fire in the belly to craft his own creations, could no longer be ignored. He made a life-changing decision to sell his portion of the DJ business to Reimer in order to compose and produce his own music. Captivated by music of the underground, Daniels took a giant leap of faith and took a 180 degree turn into the world of techno. Quickly, he devised a plan to build a production studio in the basement of his residence in Detroit, Michigan. This is where the magic begins for Daniels, as he separates from all the distractions of the world to mold his musical masterpieces. In 2002, Daniels’ label, Sampled Detroit, debuted and the rest is history.