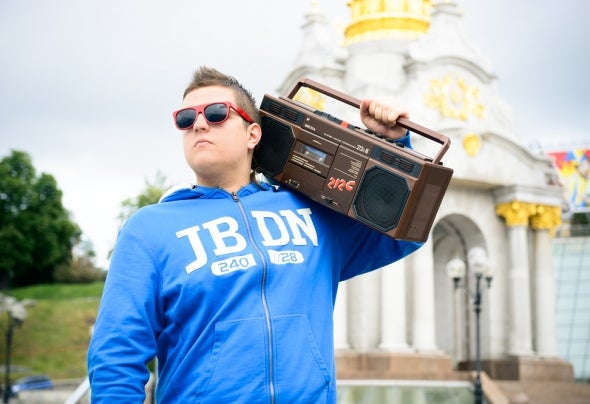 Porn actor Volodymyr Beychak, better known as Malcolm Sex,became famous thanks to the movie "Air Has No Exit." After two consistently received "Golden risers" by winning in nomination "Man-prostitute of the Year" (2005-2006) he left the porno business and work on a panel, at the peak of glory and, after a while, went to the DJ-world ... Start of DJ-career came in spring 2007, and at the end of 2009, was written first original tune. After only, 2 years in the studio VovKING became one of the most succesfull bass-producers of Ukraine and an outstanding representative of the world breaks- premier league. Having the support of, not the last people in the world of electronic music, such as Crystal Method, Dub Pistols, Splitloop, General MIDI ... became the first Ukrainian producer who headed the genre chart of Trackitdown online store and guest of the top breaks labels as Toastclub (Ireland) , U & A, Benefit (UK), Elektroshock (Spain), Kick IT (USA) ... Participant of the most outstandidng festivals as Ideology, Global Gat hering, Pirat e St at ion and t op bass-events in different parts of Ukaraine, author of the remixes for Splitloop, Vandal, Rektchordz, Kwerk & much more. Uncompromising swag and ugar, seasoned by scratches, acapellas, exclusive tunes and live mash- ups, brilliant live-performances all this is VovKING.Sex symbol of Ukrainian bass scene and the last romantic of our electro played on one stage with Dj Music Vasil!