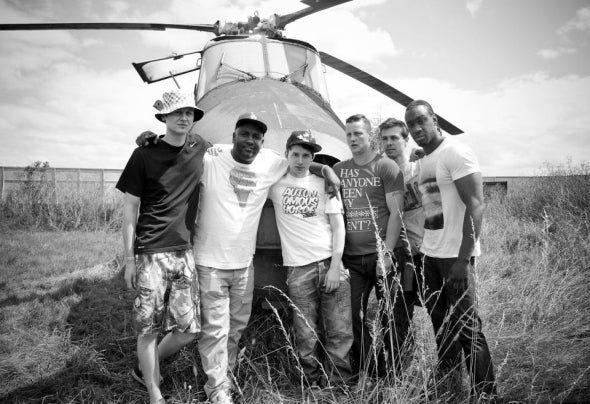 NORTH BASE are a new outfit to hit the streets with some new fresh killer beats and remixes for the likes of:BENGALAIDBACK LUKESANDER VAN DOORN,MS DYNAMITE,LABRINT H,KELE LE ROC,SL2,VIRUS SYNDICATE,TC & MC JAKES and many more....SILVER, PROPHECY, SONIC, MICROCOSM, IKEE B, SPLICE (NORTH BASE) have all been part of the Manchester scene from the early beginnings of dance music.Having all started making music and promoting parties back in early 1998, plus making smash hits for massive labels in the business, the lads have gone on to do bigger and better things in the world of bass music and so forth.SONIC & SILVER being world famous DJs and producers for labels such as METALHEADZ, VIRUS, INFRARED,DEFECT ED, RENEGADE HARDWARE, SOUL:R, and his own label NEMESIS RECORDINGS DIGITAL, they've toured different countries on a regular basis to USA, SOUTH AMERICA, EUROPE and ASIA.PROPHECY is one of the biggest promoters in Europe. Creating parties like MET ROPOLIS, RECLAIM T HE DANCE FLOOR, WAX:ON, ILLUSION, HIDE OUT FEST IVAL, PARK LIFE, WAREHOUSE PROJECT, GLOBAL GAT HERING and is also a big name DJ around the world.Now the six Horsemen have linked up to create a new force called NORTH BASE which will ignite a fresh and new exciting sound to the world of 140 & Electronic music as a whole. Be on the look out for remixes and forthcoming tracks out soon.NORTH BASE are being supported by the likes of SKREAM & BENGA, MISTA JAM, ANNIE MAC, REDLIGHT, N-T YPE, HAT CHA, SUBFOCUS, MARY ANNE HOBBS, MIKE PICKERING, JACK BEAT S, JUAN BASSHEAD and many more key names in the world of music.Be sure to catch NORTH BASE at a party near you in the forthcoming months with their amazing sets that have rocked club land across the UK. Which has now seen them headlining festivals and club nights such as GLOBALGAT HERING, INVINCIBLE FEST IVAL, HIDE OUT FEST IVAL, T OMORROW LAND FEST IVAL, OUT LOOK FEST IVAL, WAREHOUSE PROJECT, MET ROPOLIS, FANTAZ IA, IBIZ A ROCKS , CHIBUKU, LOWPASS FEST IVAL, FREEZ E FESTIVALand much much more!T he future is bright. T he future is NORT H BASE!NORTH BASE is Silver,Ikee B,Microcosm,Sonic,Prophecy, Splice making beats at 140bpm Rmx's for Benga, Laidback Luke,Sander Von Door, Ms Dynamite, Labrinth, Kele Le Roc, SL2, Virus Syndicate ,Nolay, T C & Mc Jakes