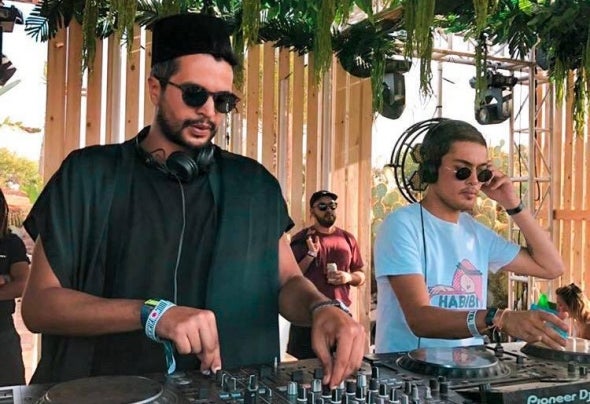 Amine Bennani & Mehdi El Amrani aka NOMADS is first and foremost the story of two friends sharing an unconditional love for music. Both natives of Casablanca, it is with brilliance that they manage to impregnate themselves of this cultural mix offered by the white city. On the side of Mehdi, we will find fairly strong influences on rap, disco house of the 80-90s and oriental music such as Fairuz, Farid Al Atrach. Amine meanwhile has shaped a rich and diverse musical culture. Growing up in a world of rock, jazz, blues and funk, he decided to dig deeper and dive into the world of electronic music at the age of 14. Immediately seduced by these sounds fresh, synthetic and electronic he decided to start production and he will make his first releases on another alias "Mendy" After their meeting, this Moroccan duo decided to join forces to create a music to their image, a powerful and subtle music to create something unique. Their DJ sets are characterized by a panel of sounds at once house, techno and disco, all while keeping African and oriental influences. These two Bedouins of the electronic music begin to become a name which counts in Morocco. A year after the creation of the duo in October 2017, they continue the dates in the four corners of the country and beyond, with rst international dates on the horizon. They released a single called Exit on the label Art Vibes Music in February 2019 and an EP called Clouds on Kindisch Records in January 2020.