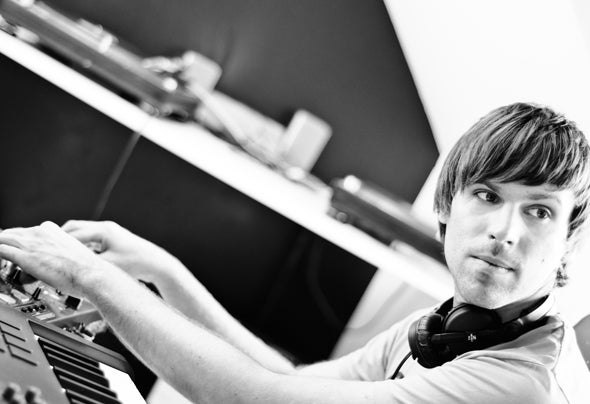 It's hard not to notice a person like Deny Doom. Behind this seemingly cold nickname and logotype, hides a very positive and charming man, called Deni Prosen, an experienced and locally popular DJ, producer, re-mixer and audio engineer from Koroska. You will be surprised by his energy, whether through personal contact or with the positive vibes he’s spreading through his music to increasingly wider crowds.The same story goes for his music. As said the man himself, he found his great love in Tech House, although he tried playing many different genres. The knowledge gained over the years of discovering versatile styles is now being integrated in his tracks, which are cold and throbbed at first but there’s a moment in each track ,where a female vocal or a short melody from the background warms it up and puts a smile on the faces of it’s listeners. You can feel all the sensuality, love and energy that he wants to sharewit h his audience.Doom is a master of combining different genres as he often travels the path through Tech House to Techno, where you can occasionally notice the vibes of other genres. He often spices things up with other groovy rhythms and with effects, added at the right moment, that forces even the most exacting crowd to dance. His music is altogether combined into an extremely energetic and explosive set, which takes his listeners into a long an unforgettable night. He said, and I quote : “ It’s hard to define music nowadays, when everything is mixed up, when everything is blended together. But if a track is good, it ’s good, even t hough it ’s minimal.His beginnings date back to Y2K. Immediate acceptance followed and so did the growth of experience and knowledge. At first he played music with local, like-minded dj-s (long-term cooperationwit h dj ba*d is t o be ment ioned) but int ernat ional collaborations soon followed (see below for references). The “Metulji” association was founded by him and his friends in 2001 and even today their parties are referred to as best parties of the region. After ”Metulji” association broke off, Doom founded a new group, called Extreme Dream, which conquered, among many other clubs, even the queen of electronics,” Ambasada Gavioli”, only in three years of operating. His rhythms were also moving crowds abroad, in Austria, Croatia and Serbia, but his journey will definitely not end here ‘cause there are many opportunities in other foreign countries on sight. It is worth to mention the fact that his abilities convinced the jury of BURN STUDIO REZIDENCY but unfortunately his journey ended in semi-finals.It’s 2012, “Metulji” 2.0 are back. Their first event, Noc debelih basov, once again brought back to dance- floor old members, fans of their original rhythms, which proves that the new version of their association is as capable as it was, if not even more, to connect people through music and throw the best parties known in Koroska. Besides the cooperation with Metulji, Doom as an individual artist, a man with a clear vision, continues his mission of improving the world in his own way –through his beats.