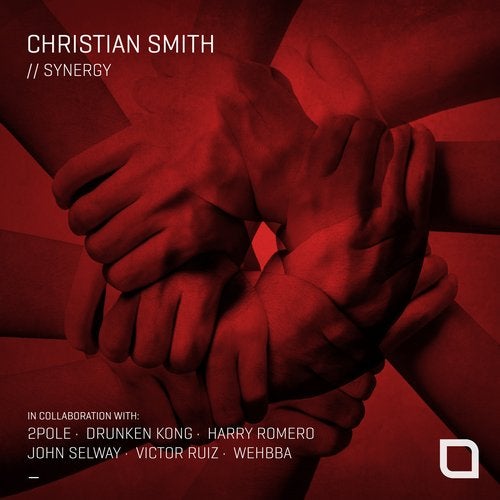 2017 brings the next big release from Christian Smith, with his album project Synergy. Compiled of 12 original tracks, the album is a selection of collaborations he has produced on the road in studios in New York, Brazil, Tokyo, Germany, and Barcelona. Tronic drip fed fans with two releases, first was Neon Jungle a groovy, vocal driven, funk inspired EP produced with house Legend Harry Romero, and the second a pummeling growler of an EP The Runner with Brazilian techno king Victor Ruiz. Christian brought together legends in the industry with John Selway and Harry Romero on this LP, along with current techno favorites Victor Ruiz and Wehbba, not forgetting some new stars on the rise with German artist 2pole and Drunken Kong, a duo from Tokyo taking the techno world by storm with their latest debut album released on Tronic earlier this year. A special track to note is Jackin with John Selway. Christian and Johns bootleg Krispy Kranz taken from Laurent Garniers classic Crispy Bacon was a smash hit back in 2004, however, the duo has been collaborating together on endless projects since 2000 and have reunited especially for this trance inspired beat. The album has something for everyone, variation is key here, with each track very different in its production and inspiration. Wehbba and Romero really bring some electro funkiness into the mix, whilst 2Pole and Victor Ruiz keep it dark with peak time, late night chugging techno. And finally, Drunken Kong deliver an industrial, minimal track throwing an unexpected but welcome addition to the 12 track innovative album. Email Subject Christian Smith collaborates with 2pole, Drunken Kong, Harry Romero, John Selway, Victor Ruiz & Wehbba on his new album ''Synergy''.