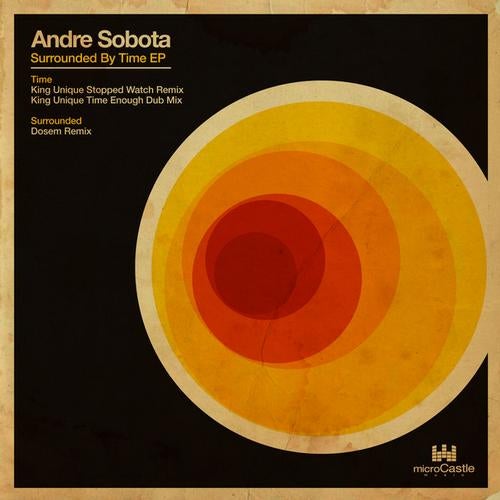 The 26th release on microCastle sees Brazilian producer Andre Sobota returning to the label for his first EP. Andre first appeared on microCastle with his remix of DNYO's 'Aquatika' from February of 2012 and it's been a sensational year for the Brazilian producer ever since. Andre's remix of Coldplay & Rihanna's 'Princess Of China' was picked up and played by Pete Tong on BBC Radio 1. Following that Andre's two tracks 'Voyager' and 'Found' were signed by Eric Prydz for release on his Pryda Friends label. 'Voyager' was then selected by Beatport as the #1 Must Hear progressive house record for that week! Andre's debut EP for microCastle is entitled 'Surrounded By Time' which comes with two brand new original productions and remixes from King Unique and Dosem. Andre's 'Time' leads the EP off and it's most certainly one of the Brazilian producers most adventurous productions to date. Beginning with a brooding heads down vibe and slowly weaving its way through a range of melancholic emotions and contemporary hypnotic themes Andre's 'Time' sets itself apart with a keen modern day techno sensibility and great musicality that shines high above almost anything else in the electronic music underground. The remixes of 'Time' are supplied by Matt Thomas aka King Unique who is returning to microCastle for his second appearance on the label with the first being his remix of Cid Inc & Lank's 'Our Benefactors' from October of 2010. Formed in 2001 the King Unique production touch has appeared on more than fifty remixes and has yielded some of the biggest dance floor bombs known to man, most notably: Dirty Vegas' "Walk Into The Sun", Underworld's "Two Months Off" and The Killers "Somebody Told Me". Matt's provided two versions of 'Time' with the first being his 'King Unique Stopped Watch' version where he's transformed the track into what will surely go down as one of the summer's biggest records. With long builds, dynamic transitions and subtly perfect sonic accents all backed by a furious ball of momentous energy the composition creates a huge presence and when combined with the amazing musicality from Andre's original tweaked just right the goose bump factor is sky high on this one. Having already been played by John Digweed on his Transitions Radio show and charted by Hernan Cattaneo this looks set to be one of King Unique's most sought after productions all year. On his second version entitled 'King Unique Time Enough Dub' Matt has provided a more stripped, punchier techno inspired mix that still comes with all the building tension and great flowing energy of his 'Stopped Watch' version but with much of the thematic parts being left out in favour of a dubbier approach. The companion piece entitled 'Surrounded' is next and it sees Andre back to his more traditional progressive house sound. With its rolling bass lines, choppy-dancefloor infused drums, bright melodic accents and one of the most gorgeous musical interludes you'll hear all year this will surely go down as one of Andre's most inspiring and feel good productions to date. The lone remix of 'Surrounded' is supplied by Dosem. The Spanish producer is making his debut on microCastle here following a string of outstanding productions over the course of 2012 on Bedrock, Sudbeat, Tronic, and Break New Soil. For his 'Surrounded' interpretation Dosem has provided a great complement to the package with a dark and dubby version that comes with great vocal stabs and a keen dance floor sensibility which when combined with an entirely new theme that's presented during the drop is sure to light up even the most discerning of dance floors.