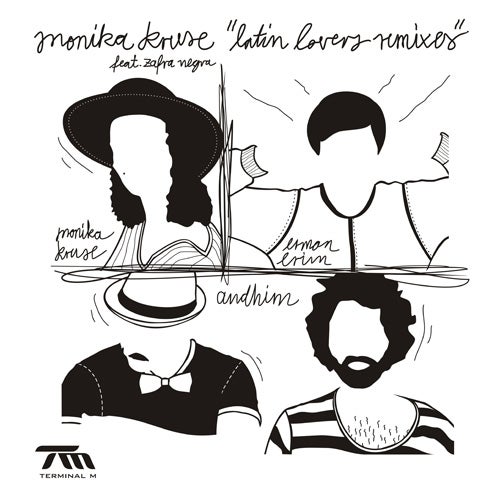 As the summer season kicks into action, Terminal M boss Monika Kruse is delving into the archives to revisit one of her greatest musical moments. 2003 saw Monika release "Latin Lovers." A club smash throughout Europe, the original went on to feature in the National charts in both Holland & Spain and was aided by its fantastic remix package that included reworks from Patrick Lindsay, Deetron, Eric Sneo and Ian Pooley. As her first release of the year, Monika has decided to give "Latin Lovers" a 2011 refresh and whilst she turns out her very own brand new version, she is also joined by her Terminal M label mates, Manon, Erman Erim, Luca Morris and Andhim who all present their own creative visions. Monika takes "Latin Lovers" on a pulsating and hypnotic trip as she brilliantly weaves the original's vocals and handclaps amongst the throb of the bass and beats. Still riding high on the wave of support for their Terminal M hit "Like A Wirsing", the crazy German duo Andhim work their magic on their "Prima Latina Remix" taking us on wonderfully wonky and surprisingly uplifting ride. Helped in no small way by the beautiful piano-lead breaks. Toughening things up is Erman Erim who turns in a fantastic slice of modern tribal, with an extra ounce of bounce. The echoing vocals work to perfection alongside Erim's rolling funk, making this a choice selection for Ibizan floors. watch this space. The release also includes both of the digital exclusive remixes. Fresh from his rework of MiniCoolBoyz on Term080, the label's Italian brother Luca Morris steps up again with a fresh and funky take of "Latin Lovers." Swiss producer Manon brings yet more bass, as the she rocks the bottom-end with an almost garage'esque quality. Filtering and fanning the vocals, she swirls them effortlessly around the gargantuan baseline.