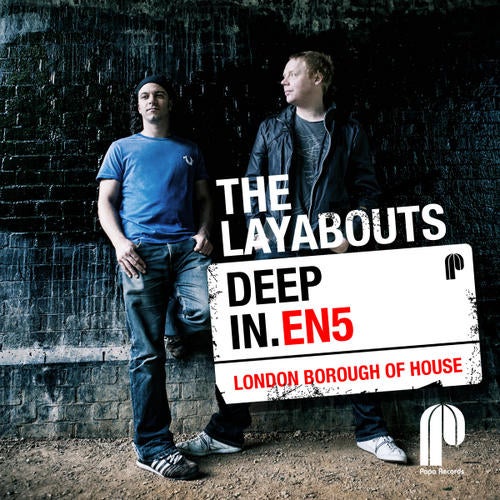 DEEP IN EN5 is the brand new compilation on PAPA RECORDS of brilliant productions and remixes to date from the mighty North London production duo THE LAYABOUTS. Marking an end of a very successful era before they embark on a slight change in musical direction, this hefty collection of dancefloor grooves includes tracks from CHOKLATE, DJ SPINNA, DJ SPEN & ROBERT OWENS and many more. DEEP IN EN5 also features an exclusive brand new single PERFECTLY featuring UK songstress SHEA SOUL along with a forthcoming LAYABOUTS remix of the REEL PEOPLE classic, ALIBI, due for release later this year.

THE LAYABOUTS are a lot more than their mellow moniker suggests. Together for eight years now thirty-somethings LEIGH DARLOW and ALEX PASCHALI have been tirelessly working the clubs as DJs, throwing themselves into remix work and touting their own tracks on reputable house imprints such as DEFECTED, SOULFURIC, MN2S and, of course, PAPA RECORDS and REEL PEOPLE MUSIC. Its fair to say theyve built up quite a following in clubland. The duos rock solid reputation for quality deep house house with soul and polish in equal alluring measure has earned them some big fans, peers and punters, along the way.

We both bring something different to the table he says. Im the real house-head, and Ill be looking at beats, rhythms and grooves. Alex is a guitarist and musician. Hell look to add musical scale over my raw production. Its a great tag-team.

THE LAYABOUTS, were actually a trio up until 2009 - third member Ben Logan decided to leave the music biz altogether. London based DARLOW and PASCHALI met in 2001 when working on various individual studio projects; DARLOW was, at the time, an engineer. Fairly soon, the pair were working together, providing clients (MINISTRY OF SOUND, for one) with dance music backing tracks; the regular commissions prompted them to strike out with impressive debut material on their own imprints, SOULWORKS and HEALTHY RECORDS. Early cuts such as FEELIN RIGHT and THE WAY I FEEL attracted the attention of KENNY DOPE GONZALEZ Ill FRICTION stable, resulting in the release STAND UP, backed by major remixes Kenny. Since then the boys remixed the likes DAVID HARNESS & ROLAND CLARK (THE DEEJAYS AN ALIEN), STEPHANIE MILLS (FREE,) MICHAEL WATFORD & DANISM (CHANGE) DJ SPEN & ROBERT OWENS (A GREATER LOVE 2010) and JELLYBEAN BENITEZ 3 AMIGOS (YOU BRING ME JOY) Their own studio output has also increased, highlights including CHOICES (with KATHY BROWN,) and THANK YOU (with PETE SIMPSON.) No strangers to the PAPA & REEL PEOPLE MUSIC camp, the boys have remixed weighty releases such as RENN NIGHTS IN AFRICA, THE REALM TIME and CHOKLATE THE TEA, along with their own tech-soul bullet release GIVE ME YOUR TRUST. Frequency has most definitely been matched by quality and complimented by a growing studio maturity. Movin forwards THE LAYABOUTS have joined forces with PAPA label boss OLI LAZARUS, who now manages the duo, who together have a masterplan to develop a new deeper and stylistic sound, fitting for both a highly innovative cutting edge artist and premier creative label alike.

In terms of tomorrow, its all about new production. Its all about our music now DARLOW stresses, which means no remixes for a while, fewer gigs and no running our own labels. It all takes up time and, right now, we want to focus fully on taking our sound to the next level.