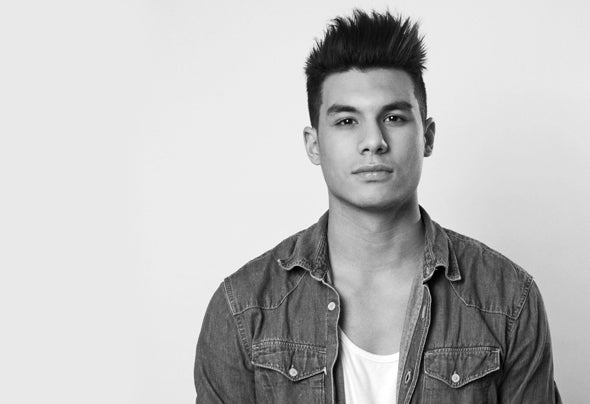 Yamen is not a ‘newcommer’ as we can tell in this musical world, but he is in artistic rebirth. He has been eaten to soundwaves since his childhood, so he decided to abandon the drum who he had started since his young age, and he turned to electronic music in 2006. Musical scene impregnated at that time by the German minimal music which he was influenced early in his career. He seduces with his productions the music labels like Drag Music, or Franz Franz in 2008, a new division of the Autist Records initiated by Ferris Borba, and so the Londoner Piso Records label, including ‘Black Compil’ his title ‘Shure’, one production of taste and quality, whose minimalist influence permeates it. The year 2010 marks two huge meetings, one with Smallroom Music initiated by Monoloc, the title ‘Harry loves you’ is resolutely turned to something more deep, the other is working with Sonata Music, a label of one important artist of current techno scene under the name of Brian Sanhaji, whose ‘Up & Down’ EP is definitely techno. Very soon Yamen by the fruit of their collaborations is acclaimed by music artists such as Alexi Delano, Joris Voorn, SIS, Tiefschwarz, Brian Sanhaji, Patrice Kunkel, Alex Kid, Dj Emerson and Attemporal. Then he goes to a deep minimal house with ‘Toudou’ EP is out on Inminimax in 2010, this title is remixed by an artist of Nordik Net Records, Chembass, but also by Rob Small of Soulman Music label, a big surprise which the title is played in the clubs around the world and proves that Yamen is an emeritus producer. His career is also marked by DJ sets at clubs and festivals around the hexagon with Sarah Goldfarb and Europe as the coveted Public Life in London or the Rheingold Club in Dusseldorf.He is in 2011 on Sonata Music on the ‘Prism’ compilation with ‘Maria Pamplona’, but this year marks a change he trades his old nickname for the benefit of Yamen, representative of his roots and evolution of his style. Gentleman with a touch of eccentricity in his music productions and always creative, he delivers a refined Deep House and sexy music influenced by Jazz, Disco and Funk roots. 2011 was for him a plenty year, in fact he launched the label UNPLEASED Records with his friends Jan hendez, EDA, Superlate and released ‘DANCE IS NOT ENOUGH’ EP, a modern and fancy musical project, composed by eclectic sound elements, and one creativity is in keeping with cosmopolitan mood of freedom.. Thanks to this he quickly get the support from influent artists such as: Bill patrick, Nick curly, DJ T, Arnaud Le Texier... and start playing over France and Europe. Year 2012 will be a year of releases and projects, attending on Safari Numerique and others well known labels.