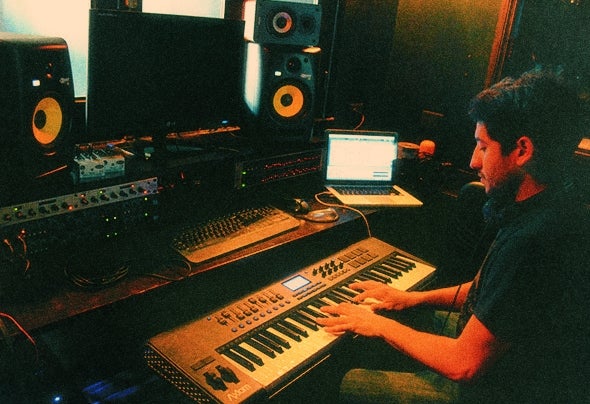 Lucas Perazzi , DJ and producer , born in Argentina , in the city of Mar del Plata. Motivated from childhood for music disco, rock and later electronics. At age 13 I began to be intrigued about what would feel to be dj . Over time this intrigue was responding sola.Desde its beginnings as a DJ at an early age , covered the circuit of his hometown clubs (like Chocolate, Gap, Torreon del Monje , New Skull Beats @ Santoficio , Velvet Sobremonte , etc.) ...After a few years , manages the residence of Velvet ( Sobremonte ), thanks to a life companion , Diego Suarez , who gave the residence.Looking for years a style that mark , found that its essence was in the House and his closest derivatives. He shared cabin with djs from : Nacho Casco , Diego Suarez , Dj Ceratti , Gustavo Godoy, Matias Castro , Sick Boy, Giorgio Marchesini , Mario Zayat , Pedro Del Buono, Diez Connection ( Eze Martirena + Diego Suarez) , Flymars between other . He is currently working on Velvet Lounge Sobremonte Club , the legendary club quintessential Costa Atlantica .As a producer, he has done several projects , some of which have been editados.En the month of June 2010, he released his first virtual disk , with one of his creations called Regardez au Bas ( Look at the bottom ) on the seal : THE FLAME Recordings, which was maintained for several weeks in the Top 1 downloads and in the most outstanding releases. Regardez au Bas, was remixed by Italian producer Stefano Franca, who on another occasion they remixed by Diego Suarez. With Diego they published in AREA SOUTH RECORDS Afrikana shakes his material , which contains another of his creations , Clarinet . T his EP was featured several Remix producer as Luciano Benz , Facundo Pikon , Stefano Franca, AudioVek , Ryo Perez and Arana.Today his music is sound enriquesido deep , minimal, dub, experimental. After a few years together decided to form a great friend Jaydas Prod 32 Floating the duo , which they will surely hear their material when it is fully implemented .He has worked with famed producer Jimmy Onassis , who works for labels such as Harlequin Recordings, Solar Records ( Dj Chus Label) , Anearia , Istmo Music . In 2009 the House version remixo a Spell Track ̈ ̈ editorial that the seal FOUR PEAS RECORDINGS .In May 2010, Lucas Perazzi & Diego Suarez released their first promo called ̈ ̈ African Wags through AREA YOUR RECORDS . Then with the same made several remix for several labels and producers including Stefano Franca, Lucianno V , Maximilian Montivero , these same remix have been released on labels like [ Rationalism Recordings, Four Peas Recordings, Area Sur Records, Surbeats Recordings , The Flame Recordings ]In 2010 he released his first EP Digital Bass ̈ ̈ au Regardez through seal THE FLAME RECORDINGS ( Italy ) who was remixed by producer and Italian friend Stefano Franca.In the same meet Gustavo Ojeda Gaston [ INFLUENZA ] , who after listening to repeatedly choose to incorporate an agency of the City of Buenos Aires.Thus in early 2011 Getafix Group enters an agency which incorporates different clubs in Buenos Aires ( Capital) . So it was that he began to be in places like BAR levitate . NICETO CLUB 69 (where was held the second edition of WONDERLAND and shared booth with DJ's The Stadiums .At the beginning of 2012 is again in BAR levitate , and the few days in one of the most prestigious locations in Capital SHAMROCK One night where Influenza & Lucas Perazzi surprised with a good and neat Back to Back , a large Live set, sharing a cabin with a prestigious producer and dj now ALEXIS CABRERA , who made a fine and coarse live session.On Friday May 4, 2012 is again in Buenos Aires in CLUB BAHRAIN , sharing booth with Jonn Midwest , Tomas Iturriza , Influenza , Matias Sundblad and Nico B.Currently as resident dj is one of Velvet Clubbing tracks SOBREMONT E complex , located centrally in the city of Mar del Plata, Buenos Aires , Argentina .Where shares cabin with various national and international artists. Influenza ( Buenos Aires ), Diego Suarez (Mar del Plata ), Nacho Casco (Mar del Plata), Alexis Cabrera ( Buenos Aires ) , Victor Alvarez Soguero (Madrid , Spain ) , Flymars (Mar del Plata), Mariano Bugarin , Germán Kunz Emanuel Salerno, Gonzalo Muñoz and several more dj's . As a producer he is working on a recent album, which will practice their knowledge and different musical genres ranging from Ambient to Experimental Minimal Techno , through various genres of electronic music and it is not too. Several creations using sound through synthesizers and software brands.It is also producing two large producers Ezequiel Martirena friends , Erico Bauer.In early 2010 with German Kunz and Mariano Bugarin created Studio 3 . Name given to the format that made Live. From 2012/2013 Luis Ricchieri , current guitarist of the group integrity.In 2012 created the cycle Club Deeper with organizer producing event in those early called Buena Vida productions, in which he had by the organization legal problems for the simple fact that in the city of Mar del Plata is not can be made after beachs . But often the good vibes of the people and places artists made several of these issues could be performed Deeper Club .During the present year in places pubs in the area , Reecks , Sailor , Zwan , Villa Victoria Ocampo in a Live session ELECTRONIC JAZZ . LLegando summer begins again format Deeper Club , Playas del Balcon with intentions changed by the organization , the duo good life and Innovation Group came to an end after the second edition of Oops @ Sierra de los Padres. Where He shared cabin with Martirena , Ezequiel Esley , Nadia PopoffAfter these events Lucas Perazzi , begins to have more dates in their city with great artists and places. The January 15, 2014 in residence gets Barnon , bar path on Alem Street , a modern format and aimed at electronic music atmosphere .Then starts ringing sites marplatense prestige Reecks , Mr Jones, Barnon , Quba Club , Chocolate Party Closings , Closing Summer Quba and then closing Carnaval @ Mute Club line up and sharing cabin with Beboo , Glasidum , Sebastian Walker, Diego Suarez , Nadia Popoff Giorgio Marchesini & Lucas Ferro, Deep Mariano , Gorge, Kaiserdisco , Emiliano Rey and many more artists .