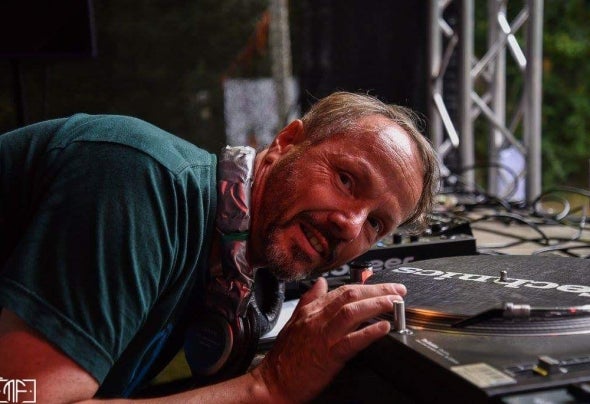 In 1980, he stood at the turntables for the rst time at Tanzschule Bier. He then got his rst ever residency in 1983, where he would perform every Sunday from 6pm through to midnight at the Big Apple in Wiesbaden. In 1987, along with Udo Niebergall, he founded Project Voyou and broke straight into the American charts with the song Houseman. Since then he went from strength to strength and eventually took over Beatdisaster (a recording studio in Reinheim near Darmstadt) with Udo Niebergall in 1989. Together, they then founded Overdrive; their rst techno label which still exists today. With over 20,000 Vinyls sold, “Don’t Stop” by Mark NRG was one of the label’s cult hits. In 1990, Talla 2XLC introduced him as the resident DJ at Dorian Gray. In the years that followed, he played at almost every major national and international event (Mayday, Time Warp, Nature One, Nightmare in Rotterdam, Rave City, Loveparade, etc.). Since 1990, he has had spots at the Palazzo in Bingen and the Safahi Lounge in Mainz. He has also been working on the Vinyl Players Mainz project with his friend Dillmanski since 2014. Now, after more than 15 years, he is working with Eric Sneo & Oliver Bach on new tracks which released this year!