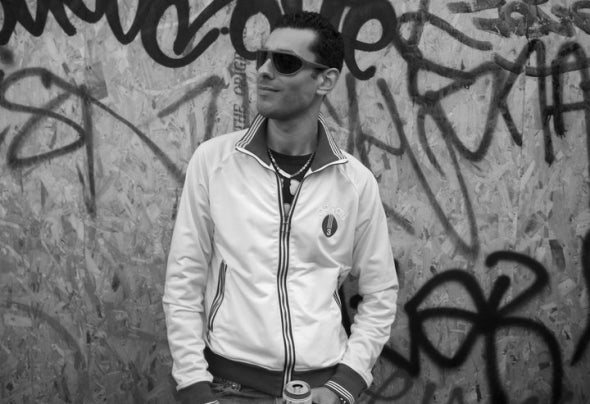 London based Italian DJ & producer, born in '86, Miky J starts to move into dance music at the early age of 13 when, at some birthday-parties, he discovered to be better in choosing tunes rather than dancing. The turning point arrived at the age of 14 when, pushed by his passion for dance music, he met with his mate Rickie Snice and began discovering together the art of djing. Having started with some belt-drive turntables, they have been spending hours at what they use to call “The Lost Cellar”, a fully equipped basement below Rickie’s house. However just playing some music wasn’t enough and the research of always something different brought them to start creating their own sounds on Acid, an intuitive but powerful software which first led to Cubase to lately end with the ultimate adoption of Ableton Live.Years and years of practice in clubs, private parties, studio productions and, of course, Rickie’s basement have brought to what Miky is today. A mix of house, tech and deep sounds all melted together to recreate a unique blend of non-stop moving dance music!Having played for various clubs in Italy, Spain, Ibiza & UK, Miky’s sets are broadcasted at different radio shows around Europe. In 2010 he signs two remarkable releases, one with Brazilian label “Bralli Rec” for his “Gitana” remix which clearly redefined the original track, and two remixes for the London based “953 Rec” (now Lowered Rec.) under the name of “Two Dots”, a project born with his long time friend Rickie Snice.Having they both already worked on personal projects and remixes this duo-project tries to mix their same creative thought bringing together a new sound consisting on Miky's melodic arrangements and Rickie's creativity and techniques.Great support from international renowned djs has been received by their remix for Erase Records boss “Wasabi” and Miky’s bootleg remix of Frivolous’ “Ostalgia” has been massively played and downloaded and to date is the only one appearing on the internet. His last official remix on Cutoff Rec. (same label of Phunk Investigation, Spartaque, Cuartero, Dandi & Ugo, Alex Young and Fabian Argomedo among others) is getting good feedbacks from the likes of Riva Starr, Pirupa, Tapesh, Birdee / Plaza De Funk and Carlo Toma to name few.Today not only Miky continues playing and producing his own music, but he has also joined F&G Management and DJ Trade as both artists manager and booking agent. He also manages Prolifica Recordings and Snatch! Records which is Riva Starr’s first label project.Two hot EPs are to be expected for the beginning of 2012 and more remixes coming later on, plus a Two Dots project which bode well. So, stay tuned! MIKY J:http://soundcloud.com/mikyj http://www.facebook.com/mikyjofficial https://twitter.com/mikyjsound http://myspace.com/miky_jhttp://www.mixcloud.com/mikyj/ http://www.residentadvisor.net/dj/mikyj TWO DOTS:http://www.facebook.com/twodots http://myspace.com/twodotsmusic http://soundcloud.com/twodots https://twitter.com/twodotsmusic