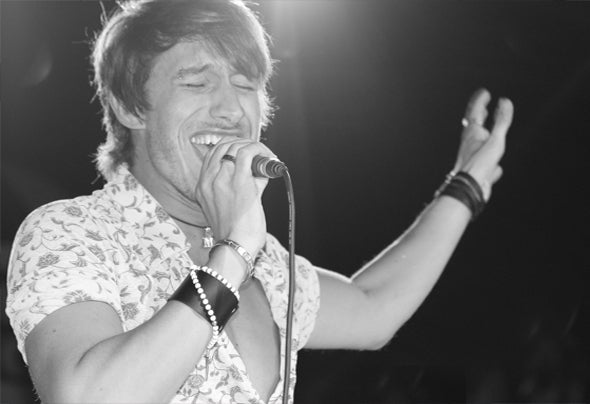 Marco Evans was born on the 14th May 1984 in Monza but his origins can be traced back to New York City. He is a singer and works as vocal coach in the TV program X Factor, for Marco Mengoni and Karima Ammar. He has performed all over the national territory and abroad for years: on television he performs in many different music shows (Antenna 3, Sky, TeleLombardia) and he has been working as official singer in the TV program "Domenica Cinque" (broadcast on Canale 5 every Sunday and conducted by Barbara D'Urso and now by Federica Panicucci) since 2010. He cooperates both live and during studio sessions with the best musicians, singers and artists on the national and international panorama. He recorded many jingles for the advertising and the radio (RDS, DiscoRadio, Radio Montecarlo, Radio DJ) in Italy, Europe and USA and now cooperates with RAI, MEDIASET, SOUNDIVA and JINGLESFACTORY and with the most important major and indie labels. He is a complete musician: he plays the piano, is both composer and arranger and producer of many different artists. His first record of unreleased tracks "All For You" will be released soon. He is now working as director of choirs and official singer in the TV program "Io Canto" conducted by Jerry Scotti. Somebody wrote about him: "…His voice is a rainbow of sounds. A chromatic scale which keeps changing colours and which swings among bass and falsetto, whispered tones and a full and vigorous register. On the stage he sings and improvises, alternating an irrepressible verve and a delicate romanticism…"