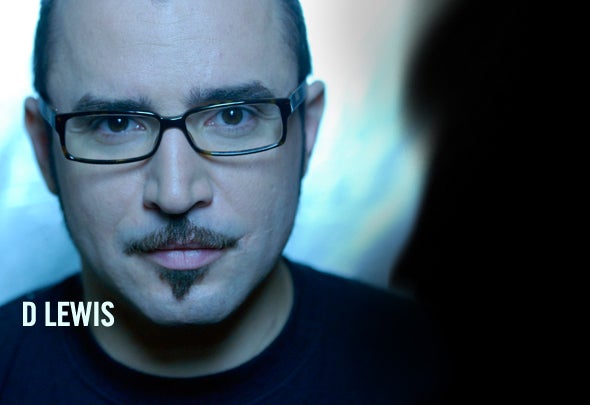 D Lewis, born on April 17th in 1973, started playing electronic music in several clubs as soon as he came of age and, at the same time, he began approaching to some discographic productions. In early 90's he met dj Emix with whom he started a long collaboration that will bring them to produce more than fifty 'vinyl records'. In 1999 he took part to a course for 'sound engeneer' in Milan and the following year he gave birth to his own 'recording studio' called 'Locomotore Recording Studio' based in Rome. After his collaboration with many different labels, he carried out the Off's Electrica salsa's remix in 2004, produced by Joe T Vannelli for Clubbin' Records , appreciated and played by many international dj's, followed by Venusville, Push it, Belladonna feat. Vladimir Luxuria, Back to acid, Gomma, Fuck, John Dahlback's remix 'If you give me' and many others… 'Scariche', one of his most known and famous records, brought him to a close collaboration with Claudio Donato's Antibemusic Records Company to which belong Acid 80', Zig Zag, Abm, Mr. Disc, Sound Real and Fulltime Records. In 2007 he published his first album, 'Officine Romane', together with Emix, distributed in Italy, France, Switzerland, Spain, Russia and broadcasted in Germany by 'Zyx Records', followed by the video 'Baby', the first single to come out and showed by the main tv-radio's stations. Together with Emix he gave birth to a discographic project titled 'Audiosafe' trying to search for new sounds. At the same time, he started performing at several prestigious clubs such as: Red Zone (Pg), Madame Butterfly (Fe), Alcatraz (Mi), Rolling Stone (Mi), Magazzini Generali (Mi), Pacha (Palma de Mallorca), Space (Valencia), Bcm (Palma de Mallorca), Divinae Folliae (Bisceglie), Peter Pan ( Riccione), Canniccia Club ( Versilia) and as resident-dj at Palladium (Rome), Cyborg (Tr), Arabesk (Vt), Nrg (Rome), Muccassassina ( Rome), Cocoricò (Rn), Area Mito (Ss) and at Space (Ibiza) on summer 2007. From 2003 he is resident-dj at 'Diabolika international party', the famous 'party-event' that brought him around the entire peninsula and in Europe and also on a 'Live radio show' every Saturday on M2O. In 2008 he realized with Emix a 'one-night show', titled 'Reazione', exclusively once a month from Cocoricò (Riccione) and from Nrg (Rome). In the same year he began writing (monthly) for a magazine 'Maxim' (nightlife/djblog). D Lewis is a very special and quite 'different' dj on the scene; his passion for music, his musical culture and his technical preparation and knowledge let himself realize some very unique 'sets', to be considered such an 'eclectic' dj.