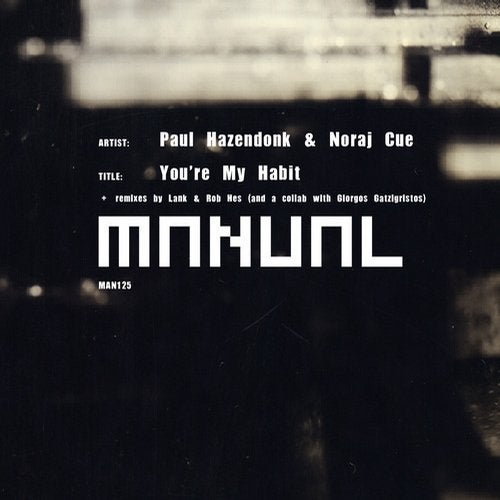 'You're My Habit' is the first single from Paul Hazendonk's upcoming album 'Adapt'. The innovative label boss has been at the helm of Manual Music since 2005, churning out stellar releases from artists including Gabriel Ananda, Max Cooper, Fairmont, Hernan Cattaneo, John Tejada, Qbical and Alice Rose- to name a few. However, it is only in the recent months that the promise of his debut album has come to fruition. On this first single we see Paul team up with his good friend and regular collaborator Noraj Cue. 'You're My Habit' is a warm and lush piece of progressive deep house music in their trademark style. A worthy first single which will make you look forward to what the rest of the album will bring. Remixes come from Lank and Rob Hes.

Hugarian artist Lank is a known name in the prog-deep-tech-funk scene with numerous releases under his belt on well respected labels such as microCastle, Baroque, Sound Avenue, Proton, Perspectives and many others. He takes 'You're My Habit' into a 80's Italo influenced direction with his rich arpeggiators and crispy clear beats, a true euphoric dancefloor monster!

Rob Hes' carreer really took off in the recent years with signings to Ideal Audio, Basmati, Selador, Sudbeat, Bedrock, Bla Bla (and the list goes on and on). We're happy to welcome him back on board at Manual Music after more than one year. He turns things up a notch making 'You're My Habit' suitable for the techno crowds as well. A phat mix that will turn some heads for sure.

To finish things off in style we see the comeback of Giorgos Gatzigristos on the label after quite some time of absence. He teams up with Paul for the 'Adorno' track, a deep and trippy techno effort which will not be on the album. This track is dedicated to their friend- and fellow Manual Music artist Tundra who passed away at young age last year and whos nick name was 'the Theodor Adorno of techno'.