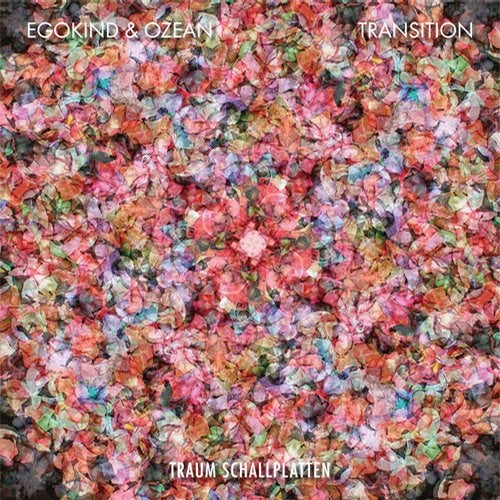 After releasing his stunning debut "Diamond Days" on Traum and the follow up "Nothingness EP" Egokind told us he had the idea for an album already sitting in the back of his head.To be able to convert all of his ideas he asked his long time friend and collaborator Ozean to work with him.

For both of them "Transition" is their debut album, but both artists can draw on a lot of experience recording music from multiple genres."Transition" combines eccentric and modern sounding club tracks, interludes which are based on improvisation and composition and mesmerizing downbeat trax.
Although Egokind states that they don`t want to match what people call contemporary modern music.

As with modern writers such as Haruki Murakami or Bret Easton Ellis Egokind & Ozean have created a rhythm within the album, creating an easy flow, making the complexity of the songs consumable. So expect something rather personal and skillful as opposed to patchwork.

That "Transition" feels personal is due to their individual approach of not paying attention to establishing formulas but to listen carefully to them selves and to develop their own formula. As a result you will not find one sound on the album which has been played with a synthesizer.Instead all is recorded and transformed, using: Guitar, Rhodes, Piano and manipulated voice.Both are trained musicians who play in bands and study at the school of arts in Berlin.The idea for the album was to come up with a composition which is harmonic and can be played also on piano itself.

Although both of them like melancholic and dark music as they state it was their intention to create a "friendly album" which is capable of embracing the listener and the clubber.For their album they both say Terry Riley was one big influence.

The Berlin based duo keeps a low profile, reflective of both their refusal to attach themselves to any linear narrative of what it means to be an artist in the digital age and a vast talent for creating their own language and sound design.

With their music Egokind & Ozean show a new generation of listeners and clubbers how to embody music without having to know the rules. In a way they give you permission to discover music.

The album starts with "Mega" a track which illustrates their approach to touch many grounds resulting in something gigantic. The track itself begins rather acoustic inviting you to the private world of Egokind & Ozean, before it becomes a joyous balearic tune that despite its wealth keeps slight dissonances coming and going.

"Flying Sparks" is a minimalistic track that connects to post rock esthetics of the 80ies. It feels like a rising star with no name. It uses means of collage to give it a structure. In fact is quite energetic and doubles speed by feel, with sparks flying all over the place, sounds rotating and then after a short acoustic part it all comes to an abrupt halt.

"Every Time You Smile" is an energetic piece of warped music which swells and and then in the next moment is diminished to small islands of voices that turn like mad creating a new cosmos almost comical at times, but always very kind and gentle as well.

"Mute Memories" is maybe the most melancholic and dark track of the album and the first and only one to really build a bridge between two contrary musical themes. All done with incredible sense for the composition. The track plunges without warning into a down beat that is constructed out of cut up sounds creating an exceptional slow motion beat. The track gives way to passages of improvisation all done with lots of artistic finesse.

"Faint Light!" follows harsh... out of nowhere falls through a torn curtain. It describes an empty cinema from days a long time ago? It is another melancholic track, and a beautiful one.

"We Float Around (And Hang Out On Clouds)" starts with an eruptive downbeat groove that is super sexy. Heavenly sounds that glide and which per overdubbed by small improvising bits,slow motion euphoria meets emptiness in a vibrant way.

"Light Realms" could be a movie soundtrack. The delicate and airily and minimalist composition does dive into deeper territories at times using a sonic language, slowing things down so you witness how the sounds blend here in real time.

"Light Realms" flows into "Silverbird" with no pause: "Silverbird" then opens the curtain and lets the sun fill out the whole room with yellow golden rays. Egokind & Ozean then unfold a garage house track which makes small turns but stay very organic and warm.

"Everything Around You Is Resonating Light" is a track with flickering melodies. It is a track quite simplistic and melancholic. There is not much you can say here you better hear it for yourself.

"Future Fireflies" is a masterpiece of a lively "percussive" rhythm that is separated by harmonically vocal layerings and enriched by happy sad melodies which have traveled form very far away.Follow the firefly.

"Eclipse" is a short sound experience and bit like an episode with voices in tremor. It hits you like a traveling sound form space which has been reinforced a 1000 times.

"Everybody Dance Now" by its title makes things very clear. Egokind & Ozean have crammed all their skills here into an hi-energy dance track, still keeping one big surprise to come halftime, when they decide to leave the trail of club culture by introducing a fantastic acoustic intermezzo, juggling and bending their sounds to the max.

"Euphorica" is the last track of the album before the bonus tracks "Diamond Days" and "Sinus". "Euphoria" is is avery cool juxtaposition of different motions all lined up next to each other... but eventually leading to a euphoric final passage of distorted orchestral brilliance.

"Diamond Days" and Sinus (recorded with Ozean) were released on Egokind's first EP on Traum and were added as an extra for you.