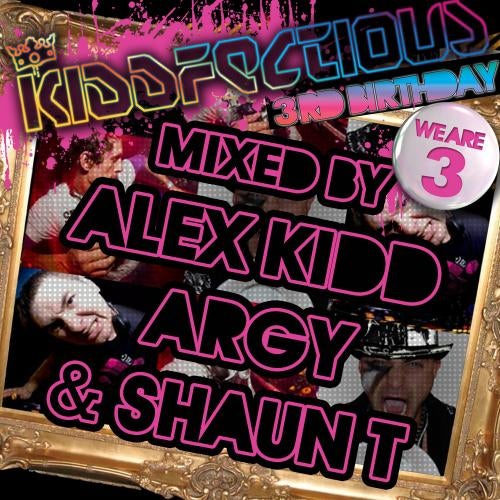 To reach the grand age of 3 is a perfect excuse for a celebration and with the Kiddfectious stable firing on all cylinders its definitely time to "Make some f'**kin Noise"!!

When it comes to hard dance, the Kiddfectious label has risen to the top of the ranks, with it's vault of epic anthems and underground classics. A look into the future shows no signs of letting up with the forthcoming releases defining the sounds for the harder heads in 2011 and beyond.

The 3rd birthday Album is a snapshot of Kiddfectious dance floor, paying homage to the biggest tunes released on the label alongside some cutting edge beats from some of the other scene's hottest producers and labels. The first mix see's label boss Alex Kidd step up to the helm, flawlessly combining a flow of tek-fexious beats and ear blistering anarchy in his true unmistakable style. Expect plenty of exclusives and unreleased material in this hour long journey of relentless energy and emotion.

Next up see's the Kiddfectious welsh hero and tyrant of tech that is Argy step up to the decks. As a special birthday treat, the Welsh wizard serves us up with a true party style mash up mix of the Kiddfectious catalogue. With exclusive edits, 3 deck mixing, fx units and the kitchen sink thrown in for good measure.this mix is without a doubt a highlight of the Kiddfectious album series that will stand the true test of time.

Finally, the Kiddfectious All Star supremo Shaun T makes his debut on the compilation circuit with his first ever officially released mix that contains bags of pace and attitude. Choosing a selection of tracks from the biggest and most exciting artists in the industry, this set will bend the brain cells round and round as he delivers fresh music from around the globe with his own unique twist on the proceedings.