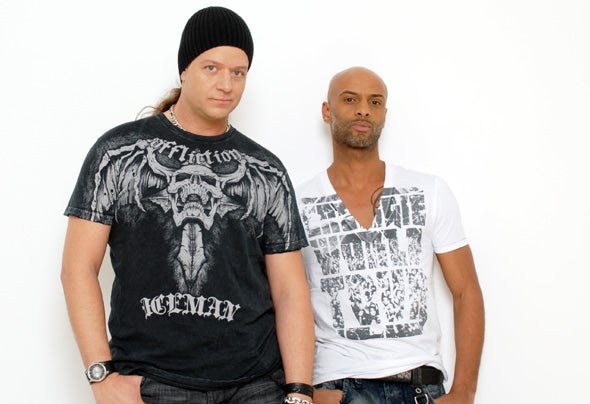 Dennis “Bonebreaker” Bohn (39) is the producer of Germany’s favourite dance icons Brooklyn Bounce. He has produced such hits as: “Get Ready To Bounce”, “Loud & Proud”, “Bass, Beats & Melody”, “Crazy”, which combined have sold over 3 million singles since 1996! He is regarded as one of the most important people in the German dance music scene. Brooklyn Bounce’s great push into the limelight returned in 2000 with “Bass, Beats & Melody” which climbed to #3 on the dance charts and their fourth LP “Restart” were a wonderful climax to an exceptional production career. A career, that of course still goes on today. Singles like “Crazy“,“X2X”, “Sex, Bass & Rock n’ Roll” and also the Album “X-pect the Un-X-pected” continued the success story. The onset of the digital age and the change of the music industry did not stop his output. In 2008, he re-released “The Theme Recall ‘08” and “Get Ready To Bounce Recall 08” very successfully on his own label, Mental Madness Records, which was formed in 2002. 2009 followed a co-operation with the Sample Rippers aka DJ Picco & Paul Hutch “Louder & Prouder” that topped all the dance-charts around the globe. In 2010, the singles “Bass, Beats and Melody Reloaded” & “Club Bizarre” together with DJs from Mars were released. All these tracks built the foundation for the album “BB-Styles” that was released at the end of the year in Germany and a few other countries to be continued worldwide. It also included 5 brand-new tracks. This LP shows the potential of producer / songwriter Bohn for the past, present and future. For his work with Brooklyn Bounce, Bohn had been rewarded with one nomination for a VIVA TV COMET, an award, presented by Germany’s major music television channel. Brooklyn Bounce had also been shortlisted twice for the ECHO, Germany’s biggest music prize. Bohn is a multi-talented person. And to him, music is the most important thing in his life. As a producer, he learned everything about sound and recording; as a former A&R man in a music publishing company. Bohn was responsible for signing Grammy nominee Mousse T. As a DJ he has an excellent image worldwide in all the top hot spots. Fusing trance, techno, hard house, hardstyle, hands-up or even house and electro, he is known as ultra tough, loud, edgy, but still mellow and groovy, which is the Brooklyn Bounce Style at its best! Dennis “Bonebreaker” Bohn grew up in a family of musicians. He has been playing the drums since he was five years old. Still today, his rock band C.Y.D. (Change Your Dealer) currently exists (www.myspace.com/changeyourdealer). He had his first experiences as a DJ by playing rock and metal records in different clubs in and around Hamburg. Later on, Bohn finally got to know house, techno and hip hop music. It did not take long until he started being a professional house DJ under his first pseudonym, D. Bone, which he played vocal and deep house. As DJ Bonebreaker, he established the typically tough Brooklyn Bounce sound as a trademark and became one of the most popular DJs of the dance community. Inspired by his work as a DJ, he released “Druck!“ and “Husten!” which were the first official Bonebreaker singles released on Mental Madness Records. Under his real name, he released a hit electro / house single on KONTOR Records titled “Rocky Beach Theme.” He has continued this side project and has done several remixes with exclusively for Australia, South Africa and recently Germany! With full force 2011, continues on with Brooklyn Bounce. There will be three more singles from the album plus various side releases on other labels. Begining with “Sex, Bass & Rock n’ Roll 2K11” which will be released together again with the DJ’s from Mars. As a DJ, he will do a worldwide promo tour that will bring him to Australia, South Africa, the United States, Scandinavia and many more countries. There is no stopping for Dennis “Bonebreaker” Bohn…Keep it bouncin’ in 2011 ! :