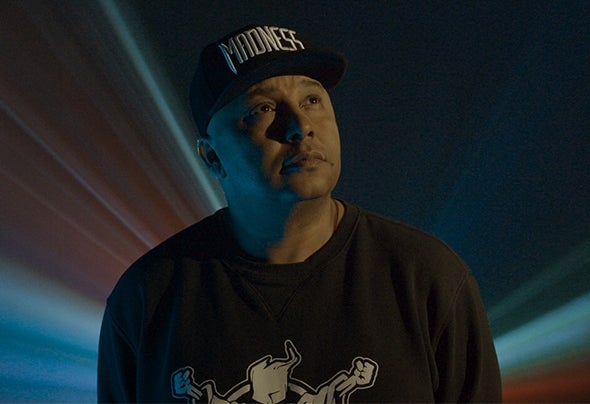 Da Mouth of Madness. A name that has been around since the very beginning of hardcore. A voice that collaborated with almost every major hardcore artist. A laugh that still, after so many years, is instantly recognized on the dance floor. A man that has seen it all, done it all and still has more in store for y’all.Sietse van Daalen first appeared as MC at the side of DJ Uzi, way back in 1994. The two young guns came from playing hip-hop in the north of Holland. They found their new love in the harder styles of house that became popular around that time. After playing gigs in the region, they performed at one of the infamous ‘Thunderdome On Tour’ events in 1995. They made a lasting impression on Sander Groet, one of the organizers at ID&T. ID&T being hot, happening and on the road to the top they are now on, made it for Uzi & Da Mouth possible to spread their form of art throughout the nation, even Europe! With raves like Thunderdome ’96, Mysteryland and The Love Parade, they quickly made a name for themselves.Next to performing live on stage, or doing what he does best in the studio, Da Mouth of Madness has also been on national television. As the anchorman of ‘TMF Hakkuh’ in 1997, he introduced legendary names like Buzz Fuzz, Dano, Darkraver, Neophyte, Rotterdam Terror Corps and many more to the big audience. Later that year MC Drokz joined him as host of the show.Meanwhile, Da Mouth was working hard on his solo career. His resume is pretty impressive, to say the least. Hosting parties like Thunderdome, Qlimax, Defqon.1, Masters of Hardcore, Dominator, Tomorrowland, Mysteryland and much more, you can truly state that Sietse has been one of the leading MC’s in the history of hardcore.