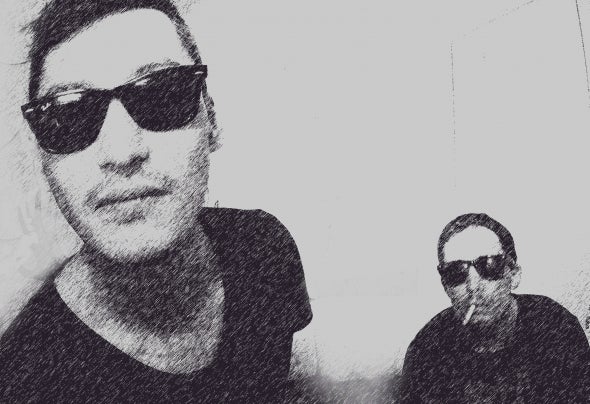 Sometimes things just happen..And sometimes really cool stuff comes out of it: Both Justin Side and Hankat are grounded Monikers on the Copenhagen underground scene and have featured together on many flyers.Besides having scorched most floors all over Copenhagen, the two are both residents at the highly renowned underground on-going-party: Skyde Klubben. The place where their deep sound flows out in various constellations with the other residents; Labelboss of Studie Strasse Records Menson, Two Third Eyes Owner and Skyde Klubben co-creator Rasmus Rekyl and the young Dee Brown. Alas: The perfect playground for these boys. Justin Side and Hankat have worked together in the studio previously, so it was only natural for the two to join creative forces behind the wheels and in the studio again. And from the first track sonic sparks went flying. Soon anot her t rack was done and t here was no way back: Strung Fellows was born.In the shape of a soothing Gumbo of Dark Moods and lifting Bass Grooves, Strung Fellows are telling stories. From the low end sub to the very top of the track, Hankat and Justin Side is in on every tweak. They try hard to give the Listener a feeling of "being taken somewhere". So they carry you on hypnotizing loops and roll you along with gentle subs and frisky Rythms.Hankat (real name Max Thelin) is an established producer and DJ in Denmark. As Hankat his live sets and unique style is his trademark, often mixing quirky pop acapellas with his deep rolling rhythms. He started making tracks in his teens, Still going and never looking back. Even though he finds himself more behind the decks these days, his right element is in the Studio - when the city sleeps.Justin Side (real name Luis Anaya) promoter, Dj and producer since 1995. Also co-creator of Skyde Klubben. He is not your average promot er t urned DJ - Justin Side is one in few that keeps focus on Sound: Be it underground block parties or classic three-hour sets. Featured in clubs and festivals around the World i.e. Fusion, BPM Festival, Secret island festival, Bar25, Sonar Off and many more. Justin Side's sound is always and foremost a unique interpretation of techno. A somewhat hybrid sound mixed of deep bass lines, chunky drums and creepy vocals.The mission at hand is to bring the Strung Fellows' sound to the world - from the studio - to the FLOOR.