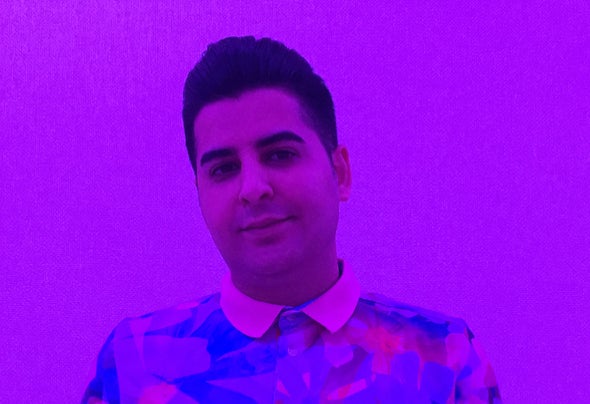 FARZAM was born on (14 April 1985) in Ahvaz, Khuzestan, and grew up in Tehran. Professionally, he is an Iranian music composer, arranger, producer, and actor based in London, UK. As a musician, Best known as EDM musical artist, he has been invited to perform at several festivals in cities such as Goa, Bodrum, and Lille. He has also appeared as an actor in several Iranian movies between 2015-2020. His very first experience as an artist was at the age of 24 when he created trance, house, ambient, and dub-step music for underground singers looking for compositions that could convey their inner sense of music to their listeners. He has also been working with sound and film teams since 2015. He created a dozen ambient and down-tempo music for Iranian movies that were looking for soundtracks and sound effects. By following the path of his professional life, he composed and arranged a collection of the EDM genre. Very soon he became famous among the composers of his city, arranging different songs for different artists. After a while, he decided to take a temporary break from music for 3 years to continue his education. During these years, however, he decided to release his unpublished music on the market. in 2021, after completing his MCA in Computer Science, he has returned to arranging new works in various genres of electronic music, which upon release have had thousands of hits and numerous sales on music streaming services such as Spotify, Apple Music, Amazon Music, Last.fm and Discogs. He still collaborates with sound crews and records his favorite music (ambient/down-tempo), and distributes it on official streaming music platforms. FARZAM has established himself as a multi-talented young Iranian and the entertainment industry has high hopes for him.