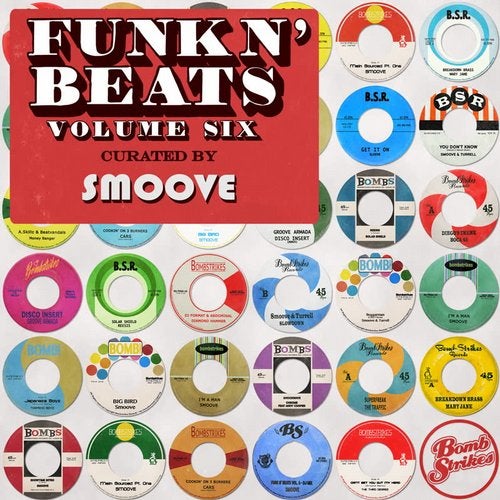 After the huge success of the number 1 album 'Funk N Beats Volume 5' from the Allergies, Bombstrikes return with the next instalment in their highly rated compilation series. As you would expect, it is once again delivered with the highest standard of music. To curate volume 6, the baton has been passed to non other than Smoove, the producer and driving force behind the legendary Smoove and Turrell. With a career in the music industry that dates back almost two decades, Smoove has a passion and love of music that has guided him onto a path that includes international DJ, label boss, live performer and re-mixer. He has used his special blend of funk and B-boy sounds to remix artists such as Nina Simone & Kraak & Smaak, to name but a few.

His obsession of crate digging is second to none and is clearly evident on this record, where he has certainly unearthed some forgotten classics. The end result is an album containing an extraordinary body of work. Not only for the collectors and connoisseurs of funk, but also for those those who just want to put on a great party record. With tracks and remixes from the likes of Groove Armada, The Third Degree, Dj Format & Abdominal and Crazy P and of course not forgetting Smoove & Turrell, this is a heavyweight compilation and shows why Smoove is so respected as an artist and DJ. Another essential album for the collection.