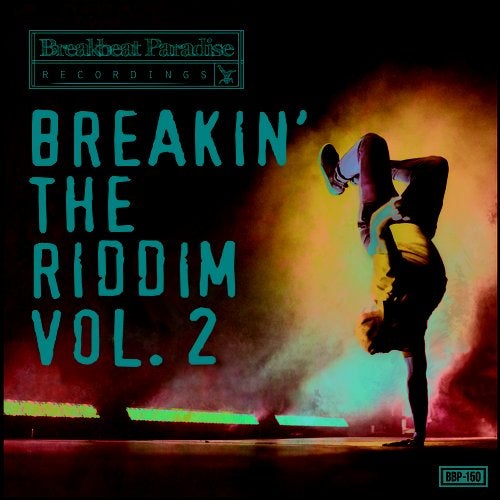 After the success of Breakin the Riddim Vol.1 from last year, we thought it only fitting to follow up with a Vol.2 And what a follow up it is. 12 tracks of reggae and dub influenced breaks, providing an array of styles for whatever your dubby pleasure.
Breakin the Riddim Vol.2 sees some newer artists mixing it up with the more established, giving a combination of sounds that is sure to entertain.

1.Illgorhythms - Fire Sound ft. Richard Smithson
A punchy beat and a plucky guitar jump out at you straight away with this from Illgorhythms- And the vibe continues after the drop with the guitar following you through a compliment of keyboards, synths, beats and bass, that fit together to provide a perfect balance of riddim and bass.

2.DJ Clairvo - Lyrical Stepper ft. The Kurnel MC
These 2 are becoming regulars on BBP, and have finally joined forces to make a sweet bouncy riddim. The Kurnel MC, with his sharp rhymes and Clairvos ability to create a vibe that can only bring a smile to your face is a guaranteed floor filler.

3.Cockney Nutjob - Let it Burn
Heavy bass and sharp beats with a dubwise influence is what Cockney Nutjob is known for, and he definitely doesnt disappoint. A deep rolling bass over the kick gives this track a rumble only this man can deliver.

4.Liberty Chaps - Hype Up!
These guys are on the up and up, and come with a riddim, that cannot be missed. Coming with some bassy funk, wobbling through some sweet vocals, and tight beats to keep it HYPE!!

5.Leygo - Meditation
Starting with some nice dub vibes, and an echoing vocal, this track explodes out of nowhere into a warped out bass breaker. With a real groove to the beat, never escaping from that dub feeling.

6.Fredy High - BoomBoom Fiya
After the success of his track on Vol.1, Fredy High has delivered again; with a hip hop head nodder wrapped up in a nice warm dubby riddim. Off-key synths and a bassline that can shake the tail off a donkey, create the perfect atmosphere for those fans of the more downtempo vibe.

7.Bezwun - No Surrender
With previous banger releases on BBP, Bezwun returns with a bassfunk style, filled with sweet synth sounds, all based around ragga vocals that fit perfectly.

8.Ocelus - Scrubby Dubby
Little known, yet not deserved, Ocelus is a hidden gem when it comes to making music. This guy has ear for a reggae vibe, using some 8-bit sounds, deep heavy bass, and vocals to sing along to, there wont be a still foot anywhere when this is on.

9.Basschimp - Bad Boys ft. Dan Sharicon
Here we have another artist that featured on Vol.1. We were so pleased with Under mi Breakbeat track, that we had to get him again. Featuring the distinctive vocals of Dan Sharicon, Basschimp produces a nice blend of funky guitars, a deep warping bass and an amen to boot.

10.Funkliners - Mad Man
Funkliners hit you with an uptempo banger filled with madness for those who like to brokout on the dancefloor.

11.Pecoe - Boom
With his ever-growing repertoire of breaks and bass, Pecoe comes with a funk-laced riddim with some recognisable vocal and instrumental stabs throughout to make this a real rolling breaker.

12.Morlack - Kool Operator
If its a bit of downtempo wobble, then this is for you. Not known for this riddim styles, but more for making ultra funky breaks, Morlack produces a wobbler filled with reggae vocals and mixing the drums up for those different styles in the track.