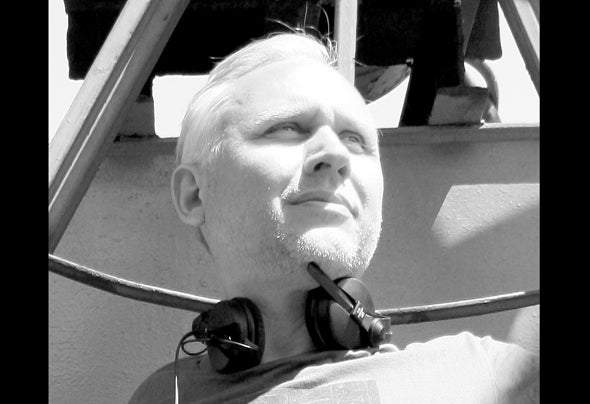 MELLOWT RON, is the brainchild of Stefan Schoenewerk, an artist from Hamburg, in Germany. Hamburg is well known for its vibrant music scene, with a wide variety of artists, clubs and venues that emerged in the 1950's, when artists such as The Beatles, Rod Stewart,Al Jarreau, The Monks,Chet Baker and Joe Cocker started their careers.Stefan's musical journey began early. At the age of twelve, in a local record shop he bought his first 12” vinyl AC/DC, "Touch Too Much”. However, it was Funk & Soul music that made a deep impression on him. Soon, he was on a mission to get his hands on every influential album he could find. Completely seduced by the “magic of vinyl", he quickly turned into a passionate and avid record collector, digging through crates of secondhand records at flea markets and vinyl auctions, searching for all kinds of Jazz, Funk & Soul rarities.Stefan realised that he had turned into a "vinyljunkie," and had developed anaddiction to Funk & Soul music, so when he happened to meet the owner of"Starpoint”, a record shop in Hamburg, a connection was made for life. T hesource of his “vinyl” needs had been encountered and Stefan soon became the shop’s first employee and record dealer.Stefan met many professional DJ’s and learnt about their equipment, until hewas able to afford a decent mixer and two Technics SL 1200/MK2 turntables.He began creating his own mixtapes, which he exchanged with friends andmusic lovers, who shared the same passion and taste in music.These "Schoenewerke Tapes" quickly became a “must have” in his circle andeventually got him his first gigs as a DJ. This was the beginning of his DJ career.In the late 80’s, Stefan bought a "Roland S50” sampler, a "Yamaha SY85" synth and an Atari 1040ST Cubase sequencer and started writing his own music, as well as collaborating with other musicians.Stefan began using the "Ableton Live" software for all his studio productions in2005. He experimented with more progressive sounds and rhythms, such asTechno and House music and from this MELLOWTRON was born. Stylistically influenced by Jazz, Funk, Soul, Rap, Hip Hop and House, he developed more of an interest for the world of electronic music and sounds.Stefan prefers to keep an open mind and dislikes his music being labelled or in a genre. He says: "I think that music has no boundaries, no limits to how it can grow and where it can go, no restrictions on its creativity. Good music is good no matter what kind of mus ic it is . And I hate labelling. I think it has no place in music."“DJing is my way of bringing the music I love and adore to people anddancefloor audience’s across Europe. In fact, the separation between all of us can be removed through music. There is only one thing, and that's the magic in music! Music has always found its way to us. It has always found me, and hopefully always will."