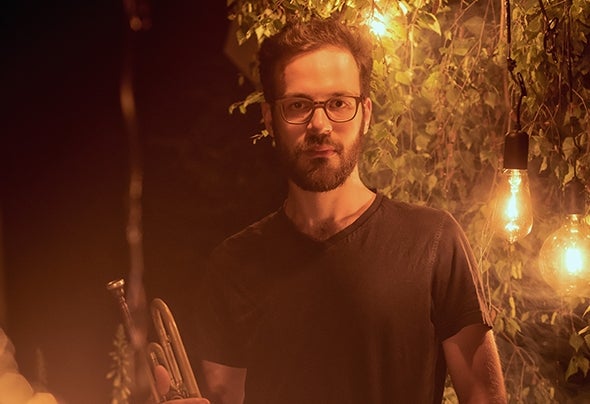 Julian Maier-Hauff, analogous electronic, playfully acoustic and above all: LIVE. As one of the few within the electronic music scene, Julian Maier-Hauff’s sounds are exclusively improvised and every audible tone is produced in the moment.Maier-Hauff, studied jazz trumpet, is a cross entrant in the field of electronic music. With his background in improvized arts, he transfers the system of the free play into electronic instrumentations. His sound is genuine, handmade, thrilling, distinct, versatile and always has a driving groove. Without computers and preprepared tracks, he turns the sensations of the moment straightly into deep beats, which are enriched by the vibrant sound of real instruments.Trompete, saxephone, trombone and rhodes create contrast to analog electronik and fit in perfectly tot he overall sound. Julian Maier-Hauff plays with depth of fictitious rooms, combined extensively elements with stimulating grooves, crystalline noises with smooth melodies. His sound picture moves without interruption from one theme to another as soon as he begin to play.Cooperations with: SAMY DELUXE (GER), PARI SAN (GER), R0T0M0D (GER), JUNGE NORDDEUTSCHE PHILHARMONIE (GER), MSOKE (CH), IRIE RÉVOLTÉS (GER), MANU CHAO (F)