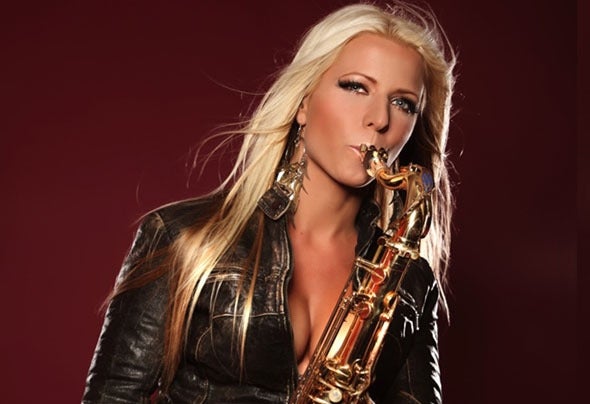 Magdalena Chovancova, smooth jazz saxophonist, but also flautist, pianist and vocalist: Magdalena was born in Havirov, Czech Republic . She began to play the piano at the age of 6. Later on she learned to play the saxophone and flute. Still in her teens she began winning national music competitions and began recording and touring with several musicians and bands . After her studies in Prague she moved to Germany and toured worldwide with the band Threestyle ( Robert Fertl : guitar, bass, trumpet and Magdalena´s twin sister Gabriela Chovancova: drums, vibraphone) and cooperated with many musicians, including Larry Porter, Butch Williams, Janine Dean, Shondell Mims and many more . They have performed in USA, China, South Africa, the Caribbean, Switzerland, Austria, Scotland, Croatia, Latvia, Italy, UK, Spain ... Germany . Still in her 20 ties she wrote and recorded the tunes for her solo debut "Moving up Quickly" and together with Robert wrote the tunes for their band Threestyle . In 2009 Robert Fertl founded the "Welovemusic" record label, and Threestyle have been releasing monthly singles under this label ever since. They have just released their third Threestyle album as well as Magdalena Chovancova’s debut solo album "Moving Up Quickly" This year they are preparing several more recording projects with various guest artists. She has also recently cooperated with Andrea Bellina- "Hollywood film music "composer and with composer Johannes Rothenaicher. She and Robert also wrote and produced acid jazz with "Sax and strings" project . Her band Threestyle was the 4th most requested band (2012) on the bestsmoothjazzradio.com London with Rod Lucas . Magdalena´s and Threestyle ´s albums are steadily climbing the charts and have been featured by smooth jazz radios, TV channels and magazines worldwide. Reviews: http://www.smooth-jazz.de/starportrait/Chovancova/MovingUpQuickly.htm http://www.smoothjazzmag.com/information.php?information_id=374 http://www.blogtalkradio.com/msbridgettelewis/2013/03/13/saxophonist-magdalena-chovancova http://artists.profile.welovemusic.de/Magdalena_Chovancova.html http://www.smoothjazz.com/artists/interviews/interview.php?id=1855 http://www.keysandchords.com/6/post/2013/04/magdalena-chovancova-moving-up-quickly.html