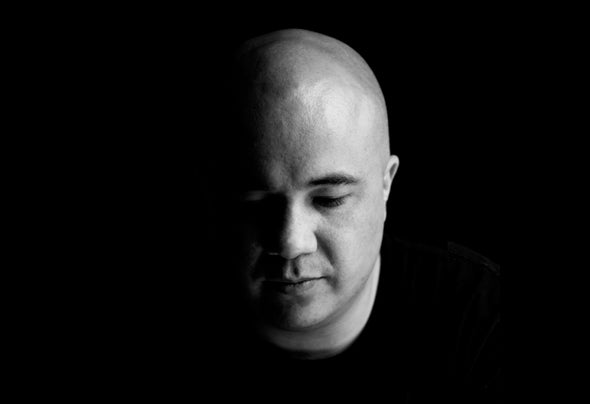 Sound> In an era of countless techno and house sub-genres, classifying Luis Flores’s sound is a difficult feat, and that is precisely its purpose. His personality and experience are presentin every track he produces, where the normally inorganic techno manages to elicit large amounts of groove and sense of humor. Flores’s interaction with the machine becomes the listeners’ interaction with auditory landscapes of eeriness, altered states and paranoia. Aminimal use of elements results in a rich spectrum of textures and a dark and trippy dance floor pull. Live shows, improvisational in nature, can last anywhere from 1- 4 hours, resultingin a hypnotic exploration of the possibilities of electronic production.Bio> In the more than fifteen years he has been producing electronic music, Luis Flores has not only made a name for himself but has been at the forefront of a movement that made thecity of Guadalajara, Mexico, a hot spot for electronic music production and events. At the center of this movement was Nopal Beat Records, a label that created its unique brand ofmusic, reflecting the quintessentially contradictory and dark spirit of Mexican nightlife. As Artistic Director of Nopal Beat, Luis worked with cultural authorities to produce a string ofmassive, free public events that could bring electronic music to a wider group of people. Besides providing a stage for local producers, he also worked with renowned international festivals, like MUTEK, to carry out their local editions, creating a meeting place for the most respected international artists and emerging local talent.In 2006, he began experimenting with an audiovisual project called Kumbia Korrupters, focused on samples from Mexican movies of the fifties and sixties. Towards 2007, the need for amore depurated style led to the launch of Antena Discos by the Nopal Beat team, which gave Luis artistic license to take his music back to his techno roots.In 2009 the release of the Damage EP on Droid Recordings, established Flores as an international artist with its immediate success, making the charts of artists such as Speedy J, The Detroit Grand Pubbahs and Chris Liebing’s Best 10 of 2009. In 2010, Dietrich Schoenemann’s Hidden Agenda released Pain + Prosthetics, an EP which among otherthings includes a collaboration with Canadian: Vitamins 4 U. Flores published the Love Your Machine EP under Dj Emersosn’s Berlin imprint: Micro.Fonthe following year. Further exploring the audiovisual aspect of his music, he created the video teaser for the single using J.G. Ballard’s “Crash” as reference and inspiration.In 2012 he returned to Droid for the release of New Flesh which included remixes by label owner Drumcell and CLR’s Brian Sanhaji. This year was also marked by people's interest inhis sound with remix requests for legendary names like Jam n Spoon and The Advent. Luis has represented México at the Meet in Beijing, FMEL in Chicago, Rock al Parque inBogotá, Borderline Festival in China, Brussels’ BEMF, Chile’s Maquinaria and Droid’s Interface, as well as in the iconic club Berghain during his last German tour.